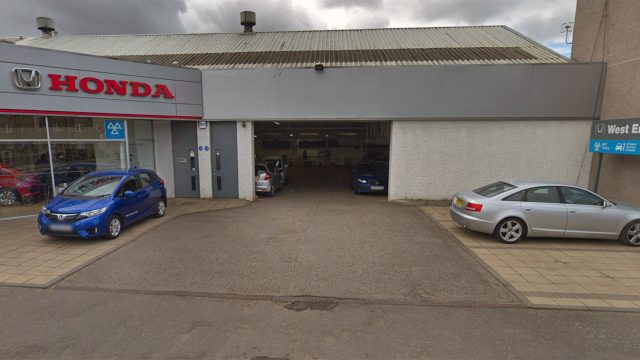 A Honda dealership in Dundee has teamed up with police to crack down on catalytic converter thefts.

The Tayside area has suffered a big increase in thefts of the devices, reports the Daily Record, with the converters fetching up to £500 on the black market because of the precious metals such as palladium and rhodium that they contain.

That in turn has prompted an increase in demand for cheaper second-hand converters to replace the stolen ones.

Hondas in particular are being targeted and West End Honda, pictured via Google Street View, is among the businesses that police have contacted after obtaining marking kits from SelectaDNA.

West End Honda MD James Ewart was quoted as saying: ‘We’re delighted to work in partnership with Tayside Policing Division in regards to this initiative.

‘Our staff have received training from SelectaDNA, which was arranged by the police, and we will offer this service free of charge when someone’s vehicle is an identified risk and is at one of our premises having work carried out.

‘We believe the reason for these thefts is likely due to the high scrap value of Honda’s catalytic converters.’

PC Steven McKay of Tayside Police was quoted as saying: ‘We were aware of this crime series and tried to come up with a new way of preventing and deterring them from happening.

‘We always look to work with new partners to find ways of preventing crime.’

He added that dealership staff knew which vehicles were likely to be targeted so there was no need for people to contact the business, but he also warned: ‘While the volume of these crimes has fallen dramatically since last year, the persons responsible will likely be active again in the future.’

It follows a warning by Staffordshire Police to dealers and the public to be on the alert after catalytic converters were stolen from two Vauxhalls at a showroom in Lichfield and six more were taken from cars in Burntwood.