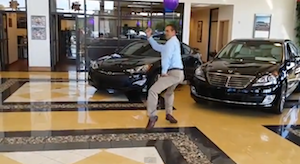 A CAR salesman at a Hyundai dealership in Alabama managed to steal the limelight from a group of professional dancers by showing off some of his old-school dancing moves.

It all started when the dealership hired street dancers to jazz up its latest TV advert, but middle-aged Joseph Barzelay was keen to show off the moves he used to pull back in the day.

According to the Daily Mail, Barzelay shocked his workmates with an unexpected dance routine, including an Egyptian walk and his own version of the Moonwalk.

His colleague, Charles Matthews, told AL.com: ‘At that point, I pulled out my phone, because I was expecting something bad.

‘We had no idea he was going to break out and do what he did that day.’

The video has now received more than 105,000 hits on YouTube and the dealership is keen to include the 20-second clip in its final TV advert.

You can watch the entertaining clip from YouTube below.