High street pharmacies will begin rolling out Covid vaccines, as the virus death toll across the UK climbed above 100,000.

Boots and Superdrug branches will be among the six stores across England which will be able to administer the jabs from today while the government aims to hit its target of vaccinating all people in the four most vulnerable groups by the middle of next month.

Andrews Pharmacy in Macclesfield, Cullimore Chemist in Edgware, north London, Woodside Pharmacy in Telford and Appleton Village pharmacy in Widnes will be in the first group to hand out the injections, alongside Boots in Halifax, and Superdrug in Guildford.

Trump becomes first US president to be impeached twice

President Donald Trump has been impeached by the US House of Representatives for a historic second time.

Trump was charged with ‘incitement of insurrection’ over the deadly mob siege of the Capitol, with the House voting 232-197 to impeach him.

Ten Republicans joined Democrats who said Trump needed to be held accountable and warned ominously of a ‘clear and present danger’ if Congress should leave him unchecked before Democrat Joe Biden’s inauguration on January 20.

People who need to travel by train during lockdown are being urged to check journey planners as timetables are slashed.

Services are being cut from around 87 per cent of normal levels to 72 per cent, with morning and evening peak services being prioritised to support key workers. 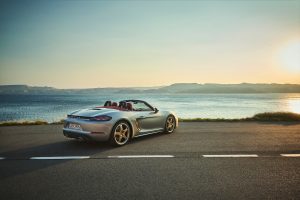 Porsche has revealed a limited edition Boxster that celebrates the model’s 25th birthday.

Called the Boxster 25 Years, it’s based on the GTS 4.0 model and be limited to just 1,250 units worldwide. It takes design inspiration from the original Boxster concept car, which was first shown at the 1993 Detroit motor show, and is on sale now with prices starting at £72,760 with deliveries following later in the spring.

Key influences include a reinterpretation of the ‘Neodyme’ paint job, which is used on various parts such as the 20-inch alloy wheels and side air intakes. Other nods include the use of the Bordeaux leather interior and red fabric roof, with the latter getting embossed ‘Boxster 25’ lettering.

The number of cars on the road during the current national lockdown has not fallen at the same rates seen during the first lockdown in March last year.

That represented 31 per cent more miles driven each day. However, it still equates to a 22 per cent reduction on normal car use, compared with the first week of February 2020. The RAC says traffic levels are currently comparable to those seen in May last year when lockdown restrictions first started to ease and people were encouraged to return to work.

Department store chain Debenhams has said it will permanently close six branches, including the flagship Oxford Street shop, with the loss of 320 jobs.

It said it had also told staff at stores in Portsmouth, Staines, Harrogate, Weymouth and Worcester last week that they will not reopen.

Debenhams’ administrator FRP Advisory said it is continuing to talk with potential suitors over the potential sale of all or parts of the business, and still intends to reopen as many stores as possible to sell off stock, despite coronavirus restrictions keeping non-essential retailers shut.

Much of the UK will see rain, sleet and snow with overcast skies, reports BBC Weather. The south west of England and Northern Ireland will see some sunny spells, however.

Tonight the rain, sleet and snow will ease and will thin out, leaving a dry night. Coastal areas may see an odd lingering shower.