Japanese dealer brings pristine McLaren F1 out of the archives 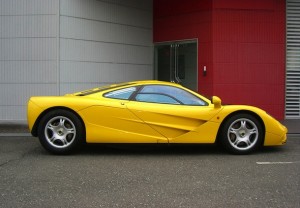 A JAPANESE dealer has just revealed a rather special – and surprising – treasure: a pristine McLaren F1, fresh and undriven since its delivery back in 1996.

The glorious yellow F1 with just delivery miles on the clock  is up for sale to the highest bidder.

Whichever collector manages to get hold of this beauty will become the proud owner of a pristine example of one of the world’s fastest cars and a design icon of the motoring world.

The Japanese site listing the recovered vehicle describes it as being in an ‘unwrapped’ state since it was imported to Japan in 1996- which loosely means it has been covered up in temperature controlled storage for an incredible (and perhaps unforgivable) amount of time.

Any Japanese speakers out there can follow this link to the original advert but have your wallets ready, British car dealer Tom Hartley Jr. managed to shift a McLaren F1 for £3.5 million last year so this won’t be cheap.

McLaren only manufactured 64 road legal models during its short lifespan, with famous owners including Jay Leno and Rowan Atkinson. With 627bhp available from its 6.1-litre V12 engine, it’s easy to see the appeal – and just how the F1 came to be known as the fastest production car in the world.

Fancy winning a Porsche model signed by a racing driver?