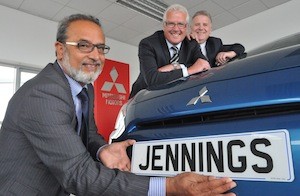 Jennings adds Mitsubishi to its group

JENNINGS Motor Group has expanded its business in the north east, following the announcement of a new franchise in Teesside.

The independent and privately-owned multi-franchise group, which boasts more than a century of history in the north east, has joined forces with Japanese car brand, Mitsubishi Motors.

Based at the group’s supersite on Cargo Fleet Lane in Middlesbrough, the new Jennings Mitsubishi franchise will house the full range of Mitsubishi models.

The opening of the latest Mitsubishi franchise is part of an on-going investment and expansion programme, which has been implemented over the past decade and resulted in the business becoming a multi-franchise group.

In addition to the group’s existing Ford branch network, Seat, Mazda and Kia franchises have also been introduced to the business.

Khan added: ‘The introduction of the Mitsubishi product range to Jennings Motor Group further demonstrates our commitment to the north east. It is also boosting the region’s economy with the creation of a number of new jobs and opportunities.’

Jennings Motor Group is one of the north east’s longest established companies, having been founded in 1903 and in 1917 became one of the UK’s first Ford dealers, the same time when Mitsubishi Motors was founded and went into production with the Model A.

Lance Bradley, managing director of Mitsubishi Motors in the UK, said: ‘We are delighted to be welcoming Jennings to the Mitsubishi family. The fact they have been in the north-east for more than 100 years speaks volumes about their tremendous reputation.

‘They fit perfectly with Mitsubishi’s customer service values and we wish them every success as the Mitsubishi brand goes from strength to strength.’