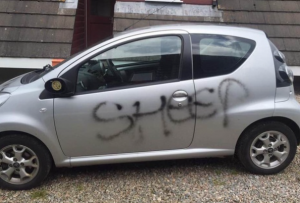 JIM REID Vehicle Sales have come to the rescue after an Aberdeen football fan’s car was vandalised on matchday.

When the fan went back to his car after the match – which saw Aberdeen beat Dundee United 1-0 – it was covered in graffiti, with ‘Sheep’ scrawled all over it.

A photograph of the damage appeared on Aberdeen fans’ site A Red Point of View, and they started a campaign to track down the owner, to offer him some help.

There were 94 retweets of the picture on Twitter, 587 shares and 63,000 people reached on Facebook – and thanks to the campaign, they found the car’s owner, Charlie Fordes.

And Jim Reid Vehicle Sales was quick to step in, offering to remove the graffiti free of charge – and give Charlie a courtesy car while the work is being carried out.

Charlie said: ‘It was a pain coming back to find my car like that, but it didn’t dampen my enjoyment of the game. Every club has their muppets.

‘I’m going into Jim Reid’s car sales tomorrow morning and also getting a loan of a car from them to keep me on the road while they attend to my car.’

Dundee United have also been in touch with Charlie and offered to pay for the damage, and invited him to be their guest the next time Aberdeen play United at Tannadice.

MORE: Buyers are more open-minded when planning a car purchase

On SuperUnleaded.com: The coolest things we’ve seen man do on motorbike