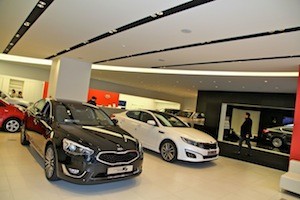 KIA could bring its K7 and K9 BMW rivalling saloon cars to the UK – but only if the Optima is a hit with buyers.

The two larger saloon cars – similar in size and looks to the BMW 5 and 7 Series – are common sights on South Korean roads, but at present there are no plans to import them.

Speaking exclusively to Car Dealer, Thomas Oh, executive vice president and COO International Business Division, said that didn’t mean they had been ruled out of the UK completely though.

‘Optima will lead the path for larger cars like K7 and K9 in the UK,’ said Oh. ‘But we don’t have to use all our resources everywhere – we can take our time and think about this.

‘But I think before that happens our image needs to change. Our awareness is still low in some markets and we need to increase that first. We must build our image further and develop Kia before we introduce cars like K7.

‘Optima will lead the way and then K7 could be a stepping stone for K9.’

A spokesman for Kia UK said in the last 12 months around 1,200 Optimas – called K5 in South Korea – had found homes. The manufacturer planned to sell between 1,000 and 1,500 in the UK and he said the brand was ‘content’ with the car’s performance.

When asked if the K7 would work in Britain, Kia UK sales director David Ovenden, said he doubted it. ‘It looks great,’ he said. ‘But I’m not sure it would work.’

If the cars did come to our shores, the names would have to change. In South Korea the brand uses the ‘K’ naming convention, but this hasn’t been adopted by the UK – and there are no plans to introduce it.

‘It wouldn’t make sense to use the K names in the UK unless we changed all the model names,’ said a spokesman. ‘And that’s not going to happen as people buy Picanto or they buy Sportage, those names have good traction and we don’t want to lose that.’