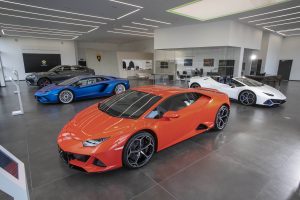 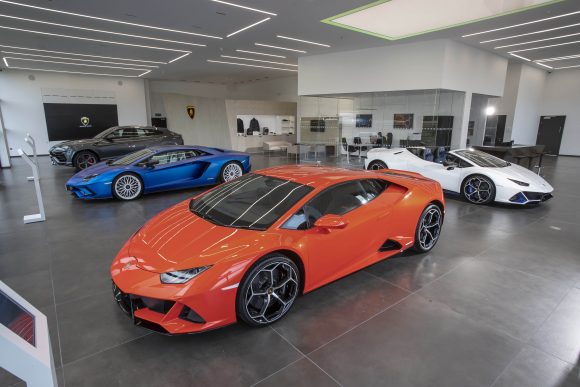 LAMBORGHINI has opened a showroom in Leeds – its eleventh in the UK.

The dealership is a new-build facility has been designed to meet the manufacturer’s comprehensive corporate identity guidelines and create a luxurious and informal environment for owners and prospects.

Owned and operated by Park’s Motor Group, which has more than 60 dealerships in Scotland and the north of England, it is the first Lamborghini franchise for the privately-owned company.

Andrea Baldi, CEO of Lamborghini’s Europe, Middle East and Africa region, together with Park’s director Ross Park, welcomed more than 200 guests to an inauguration event at which the latest Lamborghini models were presented, including the new Huracán EVO coupé and Spyder.

Baldi said: ‘We are very pleased to officially open our new Leeds dealership, and welcome Park’s Motor Group to the Lamborghini family.

‘There has never been a more exciting time for the Lamborghini marque and our growing number of owners, with an exceptional three-strong model range and Lamborghini’s continuing tradition of ground-breaking achievements in design, technology and performance.’

Park said: ‘We are delighted to be appointed to the Lamborghini franchise and to open this new Leeds location.

‘The investment made in this new showroom and an expert team demonstrates our commitment and enthusiasm for playing a significant role in Lamborghini’s future success in the region.’

The UK is consistently in the top three Lamborghini markets worldwide, headed by the USA, and is the largest within Europe. Automobili Lamborghini delivered a record 4,553 vehicles globally in the first six months of 2019.

Growth was largely driven by the Urus Super SUV, with increased deliveries also of super sports car models Aventador and Huracán. The EMEA region grew by 67 per cent, with 1,826 units delivered to customers.