Home > News > Landmark for dealership as it sells its 1000th Dacia 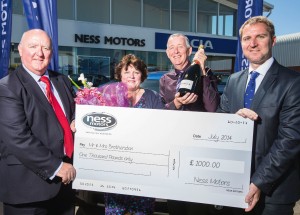 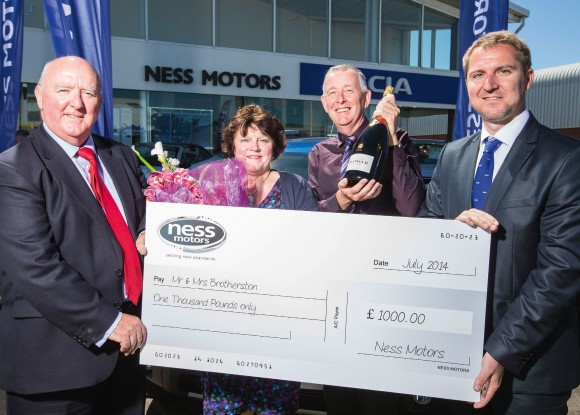 Landmark for dealership as it sells its 1000th Dacia

NESS Motors Inverness have just sold their one thousandth Dacia – making them the leading Dacia dealership in the UK – to the Brotherston family from the Scottish Highlands.

And when they collected their new Dacia Sandero Stepway, Linda and John Brotherston were presented with a celebratory bottle of Champagne and £1,000 cheque to donate to a charity of their choice – Help for Heroes – by Renault UK Marketing Director, Mihai Bordeanu.

This was the third Dacia for the Brotherston family – this new Sandero Stepway for their daughter joins the existing Duster and Sandero Stepway that are driven by Linda and John.

The big occasion also doubled-up as the official launch of the special edition Dacia Duster Mie, packed with extra specifications, and exclusive to Ness Motors, with only 20 units made.

It is currently milestone after milestone for the darling of the European car market, as last month Dacia handed over its 25,000th model sold in the UK just 18 months after crossing the channel.

But it seems to be north of the border where customers have really taken the Romanian brand to heart, with Ness Motors officially leading the way. The group which operates three Dacia dealerships – Inverness, Elgin and Perth – said it now shifts one in every 25 Dacias sold in the UK.

Scott Lauder, Chairman, Ness Motors Inverness, said: ‘As both Linda and John will be retiring soon both the Dacia Duster and Dacia Sandero Stepway provide them with the right cost of motoring. The fact it is a Renault engine under the hood provides additional peace of mind.’