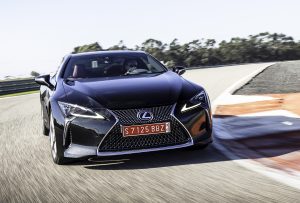 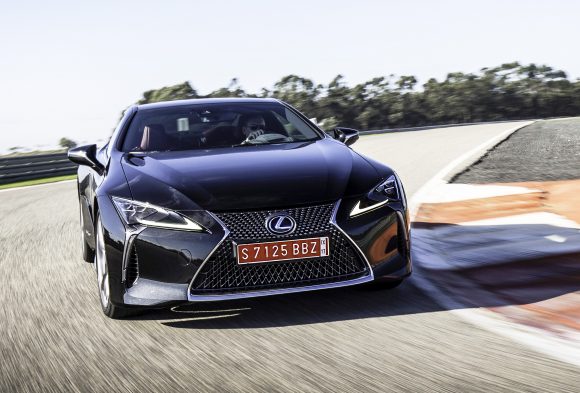 The LC is a large luxury coupe designed to be the new flagship of the Lexus range. To the Japanese car manufacturer’s credit, it has forged its own path with the development of this car to make something fairly unique.

Lexus considers the likes of the Porsche 911 and BMW 6-Series as attracting similar types of customers, but in the words of chief engineer Koji Sato, ‘we focused on emotional value rather than specs’ so direct comparisons can be tricky – to the LC’s benefit, we hasten to add.

Apart from the two engine options which we’ll come to in a moment, most of the major talking points of the LC are totally new. For a start, the chassis it’s built on gets its first outing and will also underpin the LS luxury saloon, while the suspension system took six months to perfect.

However, the big story here is the multi-stage hybrid transmission, which uses a mix of traditional automatic technology and the continuously variable transmission (CVT) often used in hybrid vehicles.

The idea is that you get the flexibility of an eco-friendly CVT and the performance-oriented capabilities of an ‘old school’ auto in one 10-speed transmission. The reality is that it takes a lot of getting used to.

A 3.5-litre petrol V6 is nestling in the engine bay. It’s mated to a lithium-ion battery, and together they provide an output of 472bhp. What’s more impressive for a car of this size is that it’ll return a claimed 44mpg. In spirited driving on high-speed German autobahns and Austrian mountain passes, we managed a respectable 25mpg, so with a more relaxed approach, mid-30s should be manageable.

A 471bhp 5.0-litre V8 version is also available, which uses much more fuel but makes a fantastic noise and is a delight to rev out.
What’s it like to drive?

On the open road, the LC 500h is a sublime cruiser. With exceptionally comfortable seats and a ride that makes even rough roads feel silky smooth, there are few cars that can do long-distance schleps in such a relaxing manner.

What’s just as impressive is how it handles a winding back road. For a circa-two-tonne car to be quite so fleet-footed is marvellous.

Naturally, it responds better when you find a smooth rhythm rather than chuck it into corners, but it settles into direction changes with admirable aplomb.

Three trim levels are available: Luxury, Sport and Sport+. Interestingly, Lexus has made the pricing identical whether you opt for the V8 or hybrid powertrain because it wants customers to buy the one they want, not the one they can afford.

Luxury-spec cars, which start at £76,595, get a suite of safety technologies as standard, premium-feeling leather upholstery and a 10.25-inch display with in-built navigation. The Sport package costs £5,000 extra and adds 21-inch alloy wheels, Alcantara upholstery and a carbon-fibre roof. Opt for the top-spec Sport+ package from £85,895 and buyers get upgraded handling kit and rear-steer technology.

Top Gear said buyers should ignore the hybrid and go for the V8, while Autocar said the divisive styling shouldn’t detract from what is a highly entertaining car.

It’s easy to fall in love with the Lexus LC 500h. Those looking for a sportier drive would be better suited going for the V8 because the hybrid’s transmission and engine note get in the way of enjoyment. However, as a luxury GT car the LC is exceptional. It’s comfortable, composed and classy.