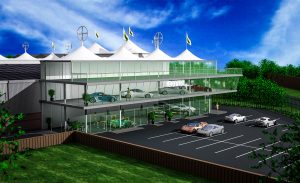 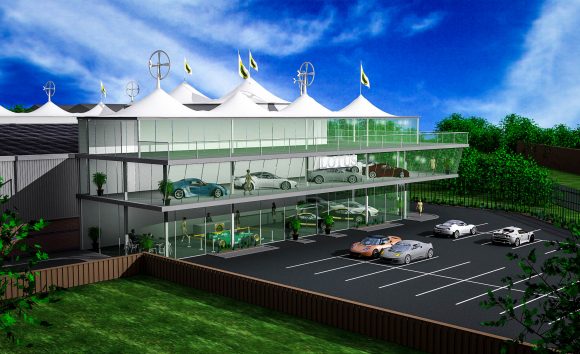 Does the iconic British manufacturer have a bright future? One of its dealers certainly thinks so…

THE WALK across the car park towards a specialist car dealership is one that can often tell you a lot about the establishment.

Arriving at Central Lotus in Nottingham, it almost feels as though an underground movement is finally stepping out from the shadows; the Fight Club of Norfolk-built sports cars is making its way into the public domain.

A large building sits next to the framework of what will become an elaborate showroom – and a quick walk through a rather barren corridor takes you to the heart of the present-day business.

The only clues as to the nature of that business are a couple of Evoras in for servicing and some pictures on the wall of the manufacturer’s founder, Colin Chapman. Eventually, you are greeted by a very neat-looking, compact showroom, packed with artefacts from Lotus’s fabled history in Formula One.

And although the heritage of the brand is very much at the forefront of everything you see here, this is quite a new franchise.

It was opened in 2016 via a collaboration between Andrew Bradbury, the owner of paint protection company Paintseal Europe, and his long-time business partner Kevin Riley.

For managing director Bradbury, it was a collaboration with the brand through his main business that led him into Lotus ownership, and from there into being a part of the brand’s servicing and dealership network.

The business is run on a daily basis by Bradbury’s 21-year-old son, Connor, who told us that it all began with a particular car.

‘For the Paintseal business, dad went over to the Lotus factory [in Hethel, Norfolk] and saw ‘‘the car’’: a Daytona Blue Evora which he soon ended up buying. He fell in love with the cars and everything Lotus was about. He’s always had a big passion for cars anyway.’ 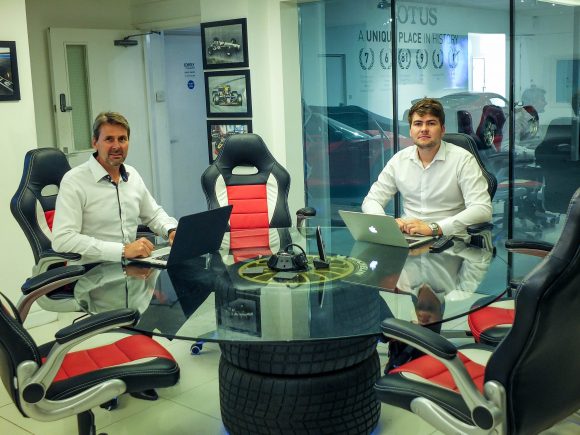 Beyond that passion, Bradbury senior has worked in the motor industry for a significant proportion of his life. He explained his early years in the motor trade, saying: ‘It was 1985 when I started in the motor trade. I joined GT Car Group, which were three franchise Renault dealers based in Nottingham, Derby and the Long Eaton area.

‘After that I went to Bristol Street Group, which at the time was selling for Citroen. That was my job for 10 years, and then I moved into paint protection in 1996.’

Initially, Bradbury noticed a gap in the market for a Lotus servicing business in the Midlands, particularly near his home just outside Nottingham. Via his pre-existing connections with Lotus, a conversation was struck up as regards potentially opening a servicing centre.

Soon the conversations became serious and had extended to include Riley, who made his money in the world of property development and has long been one of British motorsport’s most beloved ‘silver foxes’.

First rising to prominence on the track in the ’60s and ’70s, he returned in the 21st century initially driving Ferraris, then a mighty LS7 V8-powered Mosler, and now ex-Le Mans Lotus Evoras.

Lotus is a motorsport brand through and through, winning numerous Formula One World Championships and still serving as one of the most successful marques in the sport’s history, which makes Riley’s involvement in the Central Lotus dealership rather apt.

Riley is also a director of the neighbouring National Motorsport Academy, and the students bolster his racing efforts.

If you can find the door in the mirrored back wall of the dealership, you’ll stumble across the racing workshop, which also works on the road cars brought in by customers. 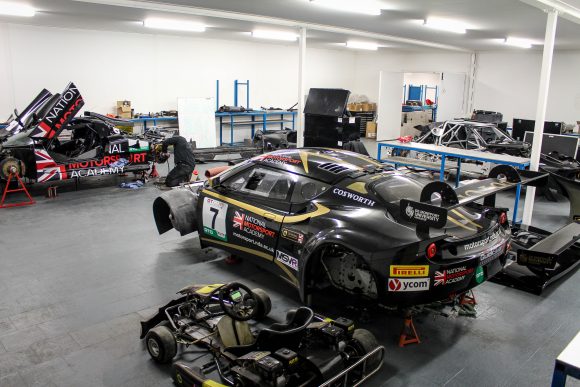 An ex-Le Mans car in the Central Lotus workshop

On the day of our visit, Riley’s venerable Mosler, as well as an Evora that raced with the factory Lotus team at Le Mans in 2011, were being worked on. In addition, a new Evora race car – a significant development from the Le Mans machine it has borrowed a chassis from – is being readied to go racing. Truly, the competitive spirit of Lotus is not lost to anyone at Central, and the brand’s heritage has been incorporated in the layout of the dealership.

Connor explained: ‘On the wall, we’ve got the ‘‘unique place in history’’, with everything Lotus has achieved to date in Formula One. The table in the boardroom is 1.7 metres wide – the same width as a Formula 1 car – and there are seven chairs around the table, each one representing a World Championship for Lotus. The wheels holding the table up are the actual wheels that were on our Le Mans car in the 2011 race.’

Riley was roped in by Andrew Bradbury as a director early in the talks to become a fully fledged dealership. While initially refusing to take up a dealership at the age of 70, his tune quickly changed when he heard it was going to be a Lotus franchise. Connor said: ‘Kevin is from that era where Lotus was winning everything in Formula One. Colin Chapman is his absolute idol, and his ‘‘first’’ racing career coincided with when Lotus was massive.

‘He owned Lotus vehicles himself in the past, and when he heard it was a Lotus dealership he basically said ‘‘Oh, go on then!’’’

It’s no secret that recent times have been tough for Lotus. The late 2000s into the early 2010s were awash with concepts that proved to be nothing more than vapourware, and there were stages where the company’s finances were in dire straits.

In the meantime, the firm pushed on, launching a long string of special editions in an attempt to keep an ageing line-up fresh.

To say that taking on a Lotus franchise in 2016 was a brave move is something of an understatement.

However, 2017 saw the future of the brand experience an upturn, with Geely taking the reins. The Chinese firm, also in control of Volvo, is set to reinvigorate the Norfolk-based outfit, announcing the most ambitious Lotus to date in the form of an all-electric hypercar. This project – named Evija – will be the first all-new car built by the brand in over a decade. 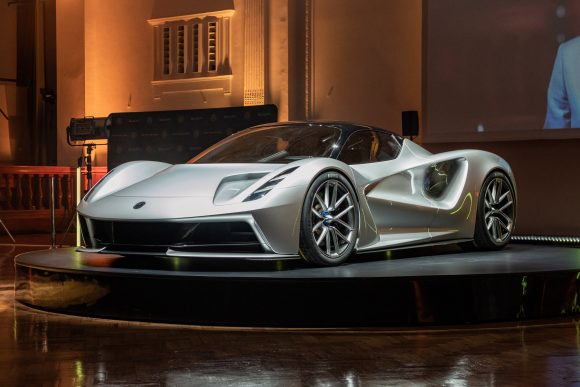 Connor said of the Evija: ‘The hypercar will hopefully show everybody what can be done now Lotus has got this backing from such a massive company that is properly investing in the brand.

‘I think they’ve always been able to do it. Some amazing cars have come out of the Lotus factory, and a fair few others also owe some of their abilities to Lotus.’

Central Lotus’s investment in the brand is now extending to the construction of a new showroom, which it refers to as ‘phase two’ of its plans. With three storeys, two of which will be dedicated to car stock, it will almost certainly be the grandest Lotus dealership in the country.

Andrew said: ‘It will be a three-storey building, which will be able to house 30 cars at the front and another 30 at the back.

‘The rationale for having a third floor is that we can have it as a bit of a Lotus visitor centre for the Midlands where we can host all sorts of events, complete with conference rooms.’

The showroom will be a great showcase for Central Lotus’s overall mantra, which is investing in its facilities for the betterment of not only the dealership but also the Lotus brand as a whole.

With optimism running high and a desire to become the flagship for Lotus in the Midlands, the ascendancy of Central Lotus looks set to mimic that of the Norfolk manufacturer itself.