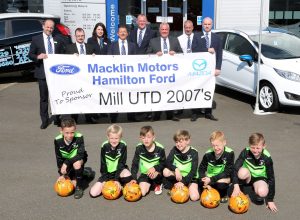 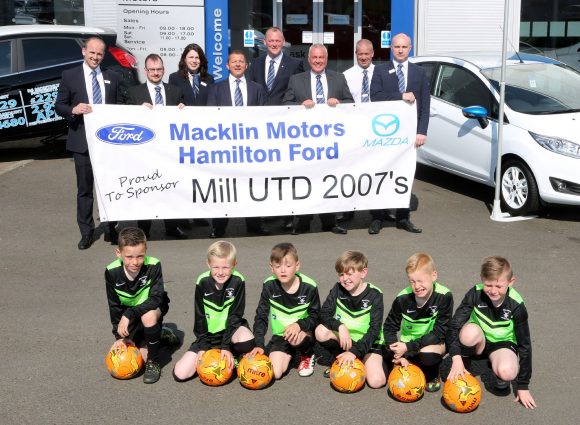 MACKLIN Motors Ford and Mazda in Hamilton have reaffirmed their support for a local community boys’ football team.

The support from the Whistleberry Road dealerships – part of Vertu Motors – will cover the cost of the Mill United 2007s’ kit and they will be kept abreast of their on-pitch performance by club secretary Stephen Devanney, who is also a workshop controller at the Ford dealership.

This is the second year that the dealerships have undertaken their support and are an example of Vertu Motors’ commitment to supporting local community organisations.

Alexander Sharp, general manager at Macklin Motors Ford Hamilton, said: ‘When Stephen approached us about supporting the Mill United 2007s, we were only too happy to help.

‘For many, the love of sport and the pride that comes with representing where they are from starts at a young age, so to be able to be part of instilling that in young people is a fantastic thing.

‘The club has a fantastic reputation, not just locally but further afield, too. Over the years, many players from Mill United have gone on to play for some of the world’s most famous and successful clubs.’

Devanney added: ‘Everyone involved with the team is very grateful to the dealerships for their support. Raising the money to purchase strips can be very difficult, so to secure the support of a sponsor like Macklin Motors is fantastic.’