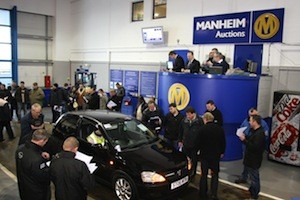 MANHEIM’S Market Analysis report shows that values of dealer part-exchanges at auction remained high in October, with average values rising by 3.9 per cent to £2,898.

The headline figure has been fuelled by a fall in age from 101 to 99 months and a reduction of average mileages from 76,851 to 75,328 during October, says Manheim.

Meanwhile, when comparing values year-on-year, the average selling price last month was 3.3 per cent higher than in October 2012, despite an increase in average mileage to 1,573 and two months in average age.

However, despite this rise in age and mileage, the average days in stock at auction has stayed relatively the same year-on-year, which suggests that vehicles are still eagerly sought after within the auction halls.

Representing 54 per cent of all dealer sales at auction, small hatchbacks and medium-sized family cars both appreciated during October. Average selling prices within the small hatchback sector rose by £183 to £2,192, while values in the medium family car sector reached £2,872 – an increase of £65.

Valuation services manager at Manheim, Daren Wiseman, said: ‘As predicted last month, demand in the wholesale market remains strong, which has led to the value increase during October.

‘The good quality stock that is being seen at auction is continuing to push up the overall values. However, we are also continuing to see an increase in the volume of stock coming to auction following the September plate change, which will affect prices in the short term as the market stabilises between now and 2014.’

He added: ‘The perception that cars are better value at the end of the year may well see more buyers coming to the auctions as they look to collect stock that can be sold at the start of the year, however we should see the market tighten and vehicle values realign as we head into the 2014.’