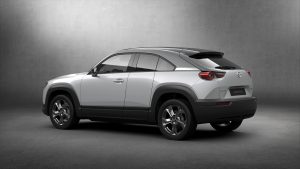 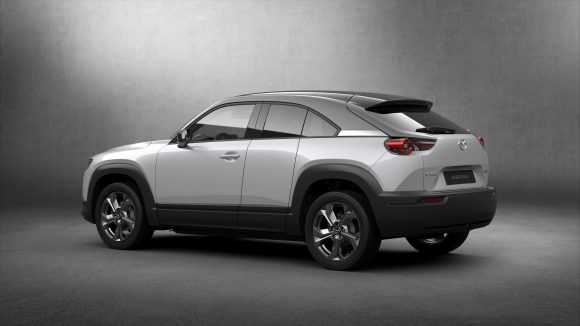 MAZDA has revealed its first all-electric car – the MX-30 crossover.

Set to arrive in the UK in 2021, it has been developed for ‘customers who don’t want to sacrifice driving pleasure’ when buying an electric car, said the Japanese firm, voted Manufacturer of the Year at the Car Dealer Power Awards last month.

Almost identical in size to the internal combustion-engined CX-30, the MX-30 takes on a very distinctive look when compared with the manufacturer’s other offerings. Although its head- and tail-lights are very similar to those used across the rest of its range, its two-tone paint finish, thin front grille and sharp cuts in the bodywork allow this particular Mazda to stand out.

Perhaps its most notable design feature are the so-called ‘suicide’ doors that are rear-hinged for access to the back of the car. It’s not the first Mazda to use such a set-up though, with the long-discontinued RX-8 sports car offered with them too.

Powering the car is a 35.5kWh electric motor. Details on performance and drivetrain specifications are currently scarce beyond that, but the firm says the CX-30 will have a range of approximately 125 miles between charges.

‘Eco-friendly’ materials have been used throughout the cabin, while vegan-friendly upholstery replaces traditional leathers. Climate control buttons have also made way for a low-set touchscreen display that can be used to operate the air conditioning.

Pricing and specifications for the Mazda MX-30 have yet to be confirmed, but the firm is accepting expressions of interest via a dedicated website.

MORE: So vital we all work together, says Mazda boss