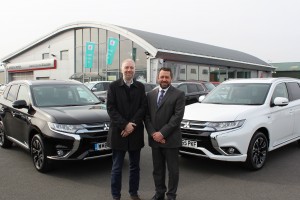 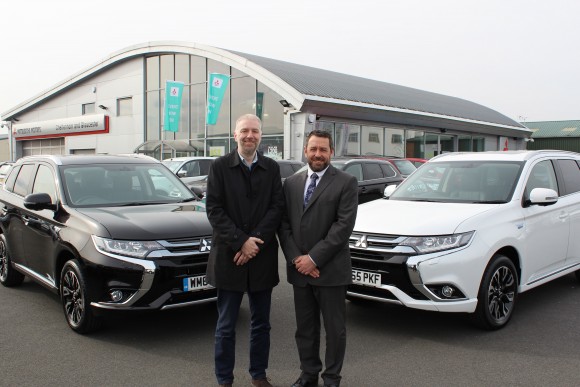 A CHILDREN’S charity has praised a Mitsubishi dealer group for saving it more than £33,000 in the last two years.

CCR Mitsubishi, which has nine dealerships across the south, has just agreed to support WellChild for a third year, by providing two Outlander Plug-in Hybrid Electric Vehicles.

And the Cheltenham-based charity, which helps seriously ill children and their families across the UK, says the partnership has already saved £33,500 ­­– enough money to pay for more than 1,500 hours of vital nursing care.

The Mitsubishi vehicles are used by the charity’s Helping Hands programme, where WellChild organises a team of volunteers to remodel the garden or bedroom at the family home of a seriously ill child in order to make it more suitable for them and improve their quality of life.

Picking up the new vehicles from CCR’s Cheltenham dealership in Meteor Business Park, Colin Dyer, Chief Executive of WellChild, said: ‘CCR Mitsubishi have played a really important part in helping us to develop and expand our Helping Hands programme, which means we are reaching more families than ever.

‘The new cars really will play a vital role in making sure that families in Gloucester, the south west and across the UK have the best possible support. We are just starting the third year of our partnership now and having their support over such a long period of time means we have been able to properly invest in other programmes.’

Since CCR Mitsubishi began supporting WellChild in January 2014 the charity has clocked up more than 100,000 miles in their loan vehicles, saving money on hire cars, congestion charges, train fares and fuel.  The partnership has supported 156 visits to families throughout the UK for the Helping Hands projects, as well as numerous events and fundraisers around the country.

Dale Bedwell, Regional General Manager at CCR Mitsubishi, said: ‘We’re delighted to support WellChild for a third year. The aim of the partnership is to reduce the charity’s costs so that more money can go towards supporting seriously ill children, young people and their families across the UK.’

WellChild provides essential practical and emotional support for seriously ill children, young people and those who care for them to ensure they receive the best possible quality of care. The patron of the charity is Prince Harry. For more information go to wellchild.org.uk.

MORE: Trade Plates: What you missed in episode one