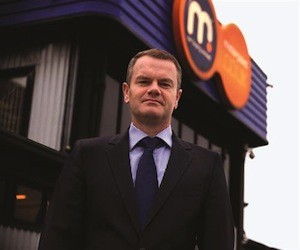 Motorpoint records sales increase of more than 20 per cent

MOTORPOINT, the UK’s largest car supermarket, recorded a 21.5 per cent increase in the total number of new and nearly new cars sold last year, according to figures released by the group.

These stats are equivalent to Motorpoint selling a car every 5.86 minutes.

According to the firm, customers also saved more than £230m off list price through buying their next vehicle from the group.

The double-digit growth is partly due to the opening of Motorpoint’s seventh site in Birmingham last year. Based on Lichfield Road, the new outlet has proved popular with buyers across the West Midlands.

This news follows the firm’s plans to expand its presence in the UK, as it looks to open two additional sites within the next 12 to 18 months.

These new outlets will create in the region of 100 new jobs as it heads towards an annual turnover of £500m.

Mark Carpenter, managing director of Motorpoint, said: ‘Motorpoint has enjoyed unprecedented levels growth throughout 2013 thanks to its commitment to providing industry-leading levels of choice, value and service.

‘We’re taking nothing for granted though and we are currently investing heavily in all areas of the business to ensure that we continue to deliver an experience for the great British motoring public that is second to none for many years to come.’