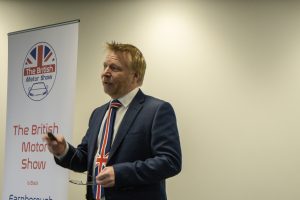 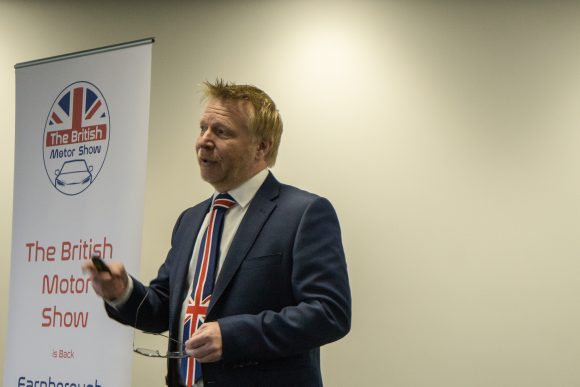 New British Motor Show aims to be more dynamic than others, says boss

THE boss of the British Motor Show says he believes it can be a success – despite a similar event being axed 10 years ago by the Society of Motor Manufacturers and Traders (SMMT).

The British Motor Show brand was launched today by owners Automotion, whose chief executive Andy Entwistle hopes the UK auto industry will help make it a success by backing the new event.

The SMMT welcomed the new show and said it ‘wished the event every success’, but was keen to point out that this was ‘a brand new show’. The similarly named British International Motor Show that it ran was cancelled in March 2009.

The new British Motor Show is to be held at Farnborough International Exhibition and Conference Centre in August 2020.

Boss Entwistle, pictured speaking at the centre today, said: ‘The difference between what happened then and what we’re doing now is that was old-school.

‘I think that the British motor show before was an example of a motor show that was struggling, and a lot of people are starting to say that about events such as the Frankfurt and Paris shows.’

The British International Motor Show was cancelled by the SMMT following stints in Birmingham and London.

At the time, manufacturers were recovering from a recession and many pulled their support as a result, instead backing selected premium motor shows such as Geneva, Frankfurt and Paris.

In a statement at the time, the then SMMT chief executive Paul Everitt said: ‘In recent years the show has played a less important role in influencing new car buyers, and vehicle manufacturers are focusing their limited resources on events and activities that have a more direct impact on brand awareness and consumer decisions.’

Many car manufacturers switched their allegiance to the Goodwood Festival of Speed (FoS) too, as it grew in stature and importance. The new British Motor Show will be held a month after next year’s Goodwood FoS from Thursday, August 20 to Sunday, August 23.

He said: ‘The traditional motor shows are very static, very expensive shows – both for exhibitors and visitors – and we’re more about the dynamic element. It’s going to be so different to anything before.’

Entwistle hopes the show will include displays from manufacturers as well as stands with classic cars, supercars and modified cars spread across six halls.

In addition, there will be a live-action arena with displays from stunt driver Paul Swift and driving experiences for those aged under 17. Celebrities are set to man a live stage too, with names such as Fuzz Townshend and Tim Shaw from Car SOS penned to attend.

Entwistle added: ‘Manufacturers are producing great vehicles, but getting customers into those cars to appreciate the great technology they offer is quite a challenge.

‘They rely on dealer groups, and while some do it well, others just want to sell the car. Having a model here will allow manufacturers to properly educate people about their cars.’

Prices for a family of four to attend the British Motor Show will be ‘under £40’.

SMMT chief executive Mike Hawes added: ‘We welcome all initiatives to promote the automotive industry in the UK and wish this event every success.’

MORE: Revealed – The categories and contenders for this year’s Used Car Awards!

MORE: CDX 2020 date and venue announced – Make sure you’re there for the big event!