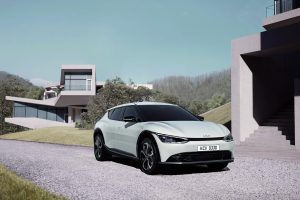 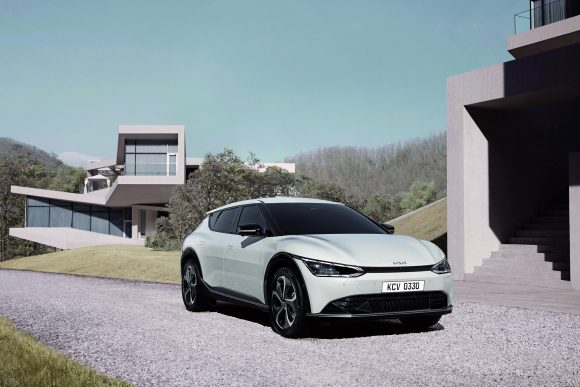 Kia has unveiled its flagship electric vehicle – the EV6.

This is the car that will spearhead the manufacturer’s new range of zero-emission motors and prices are expected to start in the £50,000 region.

The crossover looks will appeal to one of the largest markets for sales, but it has a new design philosophy that Kia hopes will mark out its new focus on electric vehicles.

The new front end uses an evolution of the existing ‘tiger nose’ grille – now called the ‘digital tiger face’ – and it has quite simple styling, such as a slim grille between the large headlights and basic bumper with large lower grille.

Meanwhile, the windows have a high line that curves up sharply at the back, and the rear is much more dramatic, with full-width tail-lights arching high above the bumper.

This almost creates the effect of a double rear spoiler quite similar to the Aston Martin DBX. 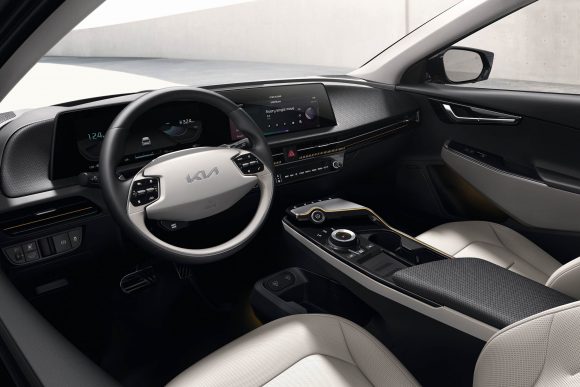 Inside the Kia EV6

The EV6 uses the same E-GMP electric vehicle platform as the Hyundai Ioniq 5, so Kia has been able to open up the cabin and create more space than you’d get in a traditional combustion-engine car.

There’s a prominent ultra-wide screen that displays driving information and runs from behind the wheel to the centre, where the infotainment display is.

Between the front passengers is an upper console with the gear selection dial and a couple of storage sections. Below that is more storage and USB slots.

Kia hasn’t revealed technical details yet, but that E-GMP platform shared with the Ioniq 5 gives us a good idea of what to expect – in top spec, the Ioniq 5 has a 72.6kWh battery that should provide more than 300 miles of range and can be recharged at speeds of up to 220kW.

Pricing and specification details for the EV6 should be released later this year.