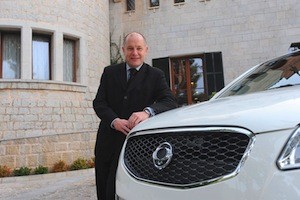 Paul Williams: SsangYong will ‘bounce back’ in 2014

AFTER recording a drop in registration figures in 2013, SsangYong UK says it will ‘bounce back’ this year.

Speaking exclusively to Car Dealer, SsangYong Motor UK CEO Paul Williams said towards the end of 2013, the brand hit a low point. Stock of its best-selling 4×4 Korando began to run out and production of the Rodius came to an end, causing registration figures to drop.

However, this year Williams has reassured dealers that for the first time, SsangYong will benefit from a full model range as well as significant growth in its network.

He said: ‘We’re in a much better place this year. Already this month we have sold approximately 65 models of the next generation Korando in comparison to just 38 last year.

‘At the end of 2013, SsangYong was going through a transition period. We were preparing to introduce the new Rexton W but stock of the Korando was beginning to run out and production of the Rodius came to an end. But now, we’re heading into 2014 with a full model range and the aim to expand our dealer network.’

This month, the SMMT revealed its total registrations figures for 2013. Among the lowest-selling manufacturers in the UK was SsangYong, showing a significant drop in year-on-year registrations.

However, Williams told Car Dealer that these latest figures don’t include the number of commercial vehicles SsangYong registered throughout the year. If you take these into account he said, the brand’s new car registrations actually remained stable.

‘The SMMT figures record a significant drop in our performance last year, but these results don’t take into account the vehicles registered as commercial vehicles, which include the Turismo and Korando Sports Pick-up,’ Williams explained. ‘If you take those into account, we actually sold more than 800 units last year.’

Marketing manager, Steve Gray, added: ‘The all-new Rexton is already generating a significant amount of customer demand. In terms of online searches, it’s already overtaking the Korando. But we won’t chase sales figures for the sake of it.

‘We are a niche brand and our key selling point is that we sell more 4x4s as a percentage than any other vehicle in its segment, at a much lower entry price.’

He added: ‘Unlike Mitsubishi with the ASX and Nissan with the Qashqai, we aren’t a volume brand. So if we sell 1,000 units this year we’ll have reached beyond our target.’