Home > News > SsangYong to expand its UK dealer network in 2014 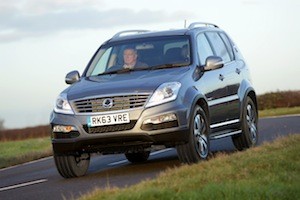 SsangYong to expand its UK dealer network in 2014

KOREAN firm SsangYong aims to add a raft of new dealers to its UK network in 2014.

The firm already has more than 50 outlets across the country, but following the launch of the new Rexton W this month, the brand hopes to gain a further 15 in 2014.

The company believes General Motors’ announcement that it is pulling the Chevrolet name from Europe gives it a fantastic opportunity to take on board new dealers.

Marketing director, Steve Gray, told Car Dealer: ‘The announcement of Chevrolet being dropped from Europe was quite a shock, but in the end we decided it would be a good opportunity to take on some new dealers.

‘We contacted former Chevrolet outlets that didn’t have a link with Vauxhall to see if they would be interested in taking on the SsangYong brand. So far, we have three dealers onboard and more showing interest.’

Being a niche brand, SsangYong believes that its dealers have to do more than simply stock its cars to be a success – they have to have the drive to sell them too.

Gray said: ‘These cars don’t have any direct rivals, so it’s not important that we push to drive sales forward. But because we don’t have a wide buyer base, our dealers need to do more than wave our flag at the sites.

‘You’ll find that most of our dealers run non-competitive used car outlets and they’re all a bunch of characters. In order to successfully sell SsangYong cars, they need to know the company and become a part of our brand.’

With a full model range and an aim to sell more than 500 cars this year, SsangYong will closely monitor its dealer network to ensure it’s achieving the best brand reputation.

Gray added: ‘Building on our current dealer network, we aim to gain at least 15 new outlets in 2014, rounding up our overall total to 60. But we will also be prepared to lose some if they aren’t representing the brand to the best of it potential – this is something we will review over the coming months.’