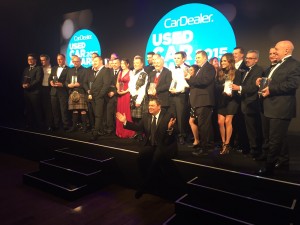 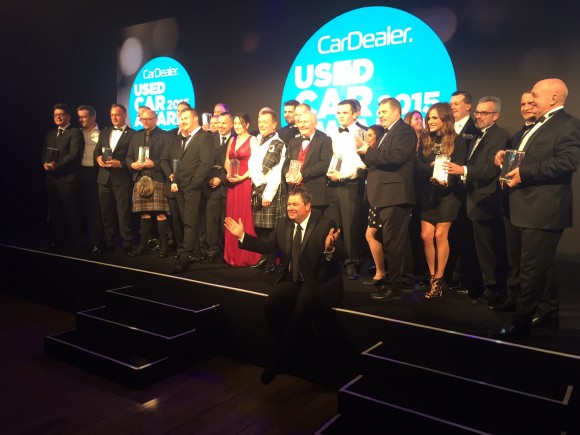 IT WAS an evening of delight for the many winners at the Car Dealer Used Car Awards last night in central London.

A total of 22 awards – and many more highly commended certificates – were handed out at The Brewery event.

Speaking immediately after receiving their awards in front of a 600-strong audience the winners spoke of their delight and pleasure at being recognised in front of their peers, and paid tribute to the hard work of their work colleagues.

‘It is a tremendous accolade and it means a great deal to us – it’s a real highlight of the year,’ said Eric Stone, who accepted the first award of the night for WMS Safe & Sound in the Used Car Product of the year category.

‘It means a lot to the team back in the office,’ said Brett Ward of Harwoods, who accepted the Dealer Website of the year award. ‘We don’t put ourselves forward for awards normally, but we believe in Car Dealer and the awards, and what they represent.

‘It’s very, very important for us to win this award, and it’s great for the industry to be recognised at an event like this,’ said Jim Reid, winner in the Dealer’s Dealer of the year award.

‘We work hard to generate leads for our dealers, and it’s great to be recognised for all the hard work we put in on the website,’ said Peter Norwood after collecting the Manufacturer Website of the year award on behalf of his team at Jaguar Land Rover.

‘For us it is all about the customer and the car, and today is a great reflection of the fact that we are good at that,’ said a delighted Andrew Muggeridge after receiving the Best Customer Care award for the Uber GT team.

‘We were delighted to have been nominated, and even more so to have won this award – it is a great chance to be recognised for all the hard work that we all do,’ said Simon Palmer of Hendy Eastleigh after coming off stage having won the Best Used Care Dealer award in the 100-plus cars category.