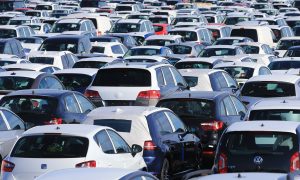 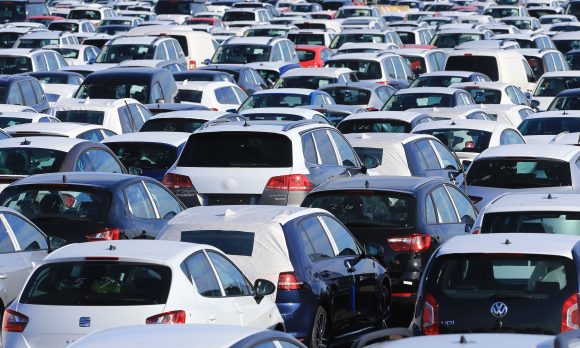 THE UK new car market fell by 1.3 per cent in November with 156,621 models registered, according to figures released today by the Society of Motor Manufacturers and Traders.

It maintains the downward trend for new car registrations throughout 2019, as multiple factors, including weak business and consumer confidence, economic uncertainty and confusion over diesel and clean air zones, combined to affect demand.

In November, the decline was driven primarily by weak private demand, with registrations down by 6.1 per cent, while the business market also fell, down 3.2 per cent, but fleet registrations fared better, up 2.8 per cent. For the second consecutive month, total alternatively fuelled vehicle (AFV) registrations reached a record market share, with more than one in 10 cars joining UK roads being hybrid, plug-in hybrid or pure electric – equivalent to 16,052 cars. 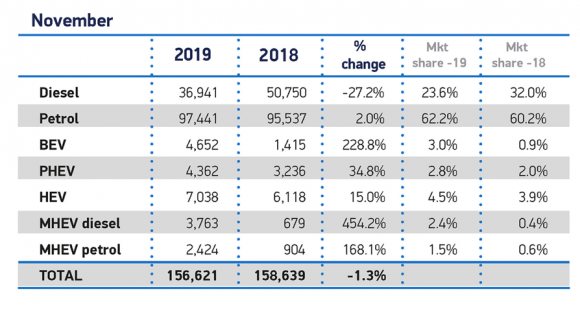 Demand for the latest battery-electric cars surged by 228.8 per cent, with 4,652 registered, while the markets for plug-in hybrids and hybrids also rose by 34.8 per cent and 15.0 per cent respectively. Elsewhere, petrol grew by 2.0 per cent, taking the lion’s share of all registrations (62.2 per cent), as diesel fell by 27.2 per cent. Year to date, the overall UK new car market is down 2.7 per cent, with 2.2 million cars registered, in line with current industry forecasts.

SMMT chief executive Mike Hawes said: ‘These are challenging times for the UK new car market, with another fall in November reflecting the current climate of uncertainty. It’s good news, however, to see registrations of electrified cars surging again, and 2020 will see manufacturers introduce plenty of new, exciting models to give buyers even more choice.

‘Nevertheless, there is still a long way to go for these vehicles to become mainstream, and to grow uptake further, we need fiscal incentives, investment in charging infrastructure and a more confident consumer.’