Total volume rose by a hefty 21 per cent to 1,258,412 units when compared to December 2018 – and monthly growth levels have not been this high since August 2018, when the impact of WLTP regulations caused an artificial spike.

The new regulations bring in a 95g/km average fleet target, which is still a long way off for many manufacturers who rushed for last-minute registrations, and triggered the unusual growth. 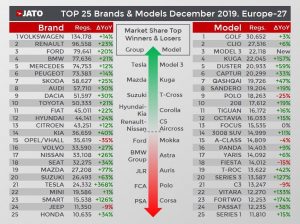 Felipe Munoz, Jato’s global analyst, said: ‘The spike in registrations may initially look like good news, but Jato’s latest data tells a different story as emission levels have not improved for the big five markets.

‘The December registrations are an indication of the ongoing regulatory challenges facing car makers in the year ahead.’

The country rankings tell a similar story, with registrations increasing in all countries except Norway and Lithuania. Twenty-three of the 27 markets analysed recorded double-digit growth.

SUVs continued their strong performance across Europe in December with 524,500 units registered, representing 42 per cent of total volume. Coincidentally, the result was 42 per cent higher than the total recorded in December 2018.

Electrified vehicles emerged as another big winner in December with demand soaring by 69 per cent – equating to 132,200 units or 11 per cent market share.

In fact, the Tesla Model 3 was the most exciting performer of the closing month of 2019. With 22,100 units, it became the third best-selling model in the rankings, outselling other popular cars such as the Volkswagen Polo, Peugeot 208, Nissan Qashqai and Skoda Octavia.

EVs are closing the gap at an impressive rate when compared to their diesel counterparts. In December 2018, there were 4.6 diesel cars for every EV sold; a year later the ratio has fallen significantly to 2.9. Most of this progress has been due to pure electric cars (BEV), which outsold hybrid vehicles (HEV) for the first time.

2019 looks set to be a record year for new business volumes, says FLA

Auction houses reveals plans as they gear up for physical reopening