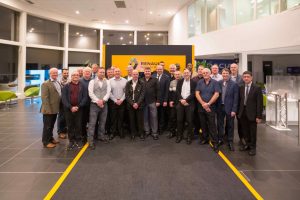 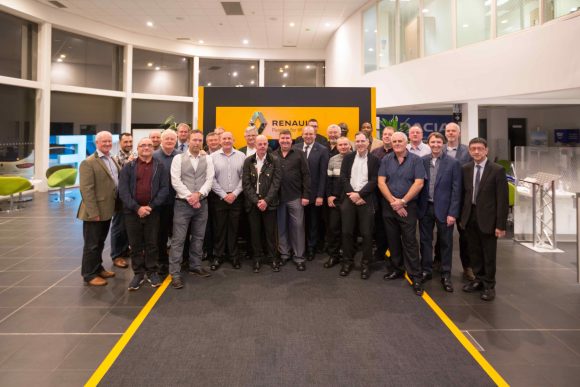 RENAULT Retail Group has honoured its longest-serving staff at a special event for those who have been with the company for more than 25 years.

Held at Renault Cannock, the event recognised the dedication of 31 members of staff, who combined have worked for the group for an astounding 1,006 years.

During the celebratory night, each member of staff was presented with a special commemorative award and a silver cutlery set by group managing director Barry Jones.

The longest-serving member of Renault Retail Group to collect an award was Philip Jackson, who has worked at Renault Manchester for 41 years. Straight after leaving school, he started at the dealership on  August 11, 1975.

Jones said: ‘Renault Retail Group is immensely proud to have such dedicated staff, and we felt that these individuals who have spent, in many cases, their whole career with us deserve to be recognised. We are rare in having so many people across our business who have completed over 25 years of service and we will be celebrating every long service achievement in a similar way in the future.’

The group is Groupe Renault UK’s wholly-owned dealer network, and Nick Tame, sales director for Groupe Renault UK, said: ‘We are very proud to have such loyal and committed people representing our brands. With their expertise and knowledge perfectly complementing our award-winning vehicles, these people help to ensure that customers enjoy a first-class experience from RRG in every aspect of their Renault or Dacia experience.’

David Lewis, a parts adviser at Renault Manchester, received an award after completing 39 years of service at the dealership. Together with Jackson, he was one of eight staff from Renault Manchester to be presented with a long service award.

Lewis said: ‘It’s very nice for us to have our service recognised and it is Renault Retail Group’s respect for its team that has played a part in my decision to stay in the job for so long. Even though we’re immensely busy – our department having over 1,200 trade customers alone – and there’s been a massive amount of change over the years, I still enjoy the role and I’ve never actually considered leaving. I have some great colleagues and the atmosphere is fantastic.’

Renault and Dacia were voted number one and number two respectively in the UK car industry by customers in the 2016 Auto Express Driver Power survey for dealer satisfaction, while 108,747 Groupe Renault vehicles have been sold, as at end of October year-to-date, for a market share of 4.4 per cent – up 12 per cent and almost double that of the total market growth rate of 2.5 per cent.

Renault Retail Group currently employs nearly 900 members of staff across its 19 nationwide Renault and Dacia dealerships. The 100 per cent manufacturer-owned dealer network sells one in four Groupe Renault vehicles sold in the UK and, since being established in 1996, has sold more than 350,000 vehicles.

On SuperUnleaded.com: How To Survive An Epic Road Trip