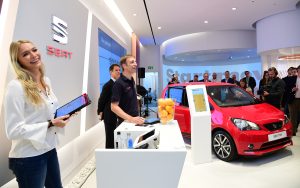 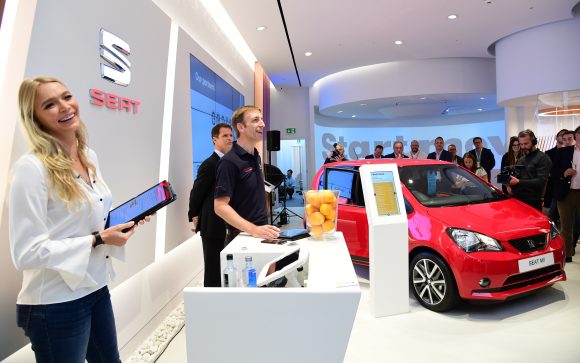 Seat White City – in the Westfield shopping centre – is 50 per cent bigger than its sister store at Lakeside in Essex, which opened last September, and will be seeking to tap into Westfield’s estimated 27 million annual visitors.

Thirteen permanent, full-time jobs have been created at the store, which boasts five display cars plus 10 cars available to test-drive, which can be taken unaccompanied.

The store uses natural materials combined with Mediterranean-inspired colours, which aim to give a warm and welcoming environment. Adding to the street scene vibe, a tree takes pride of place in the centre of the store, which has interactive services and screens plus a quiet and private consultation booth.

Speaking at the official opening, Seat UK director Richard Harrison said: ‘I’m delighted to be able to bring our exciting brand into the heart of London with the opening of our second store, this time in Westfield.

‘Our new White City store looks terrific and I’m sure will open up the Seat brand to a whole new generation of enthusiasts and buyers alike, thanks to its high-tech, relaxed Mediterranean vibe and our team of product experts ready to help London shoppers discover why we’re creating such a buzz in the industry!’

Speaking to Car Dealer Magazine, Harrison added: ‘In a shopping centre, there are around 27 million people per year coming through, many of whom are not in the market to buy a car and don’t know Seat. It’s all about building long-term relationships with the people who shop in Westfield shopping centre, because when they’re next in the market to buy a car, we want them to come back to us.

‘Every one of my team in Milton Keynes will be spending a day on the floor every year. You can learn far more about what customers want in one day down here talking to people than you can spending a month reading reports.’

On SuperUnleaded.com: Seat Leon owner takes on McLaren P1 at Nurburgring and comes out on top