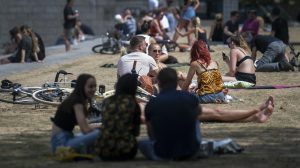 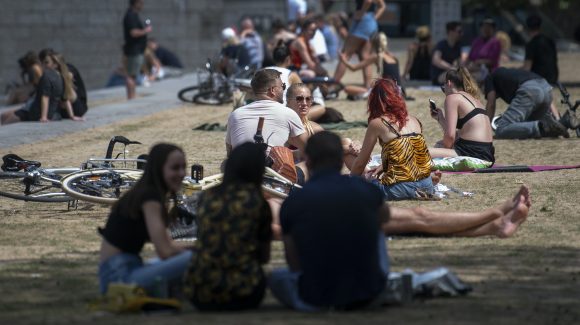 Social gatherings of more than six people will be illegal in England from Monday as the government seeks to curb the rise in coronavirus cases.

Boris Johnson will use a press conference today to announce the change in the law after the number of daily positive Covid-19 cases in the UK rose to almost 3,000.

The legal limit on social gatherings will be reduced from 30 people to six. It will apply to gatherings indoors and outdoors – including private homes, as well as parks, pubs and restaurants. 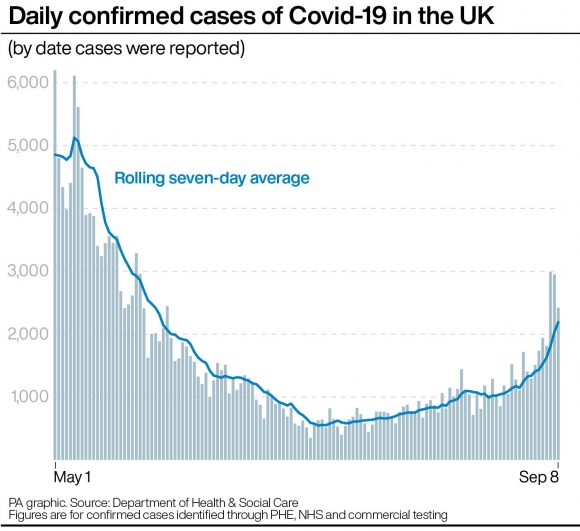 Trials of a Covid-19 vaccine under development by AstraZeneca and Oxford University have been put on hold owing to a reported side effect in a patient in the UK.

AstraZeneca issued a statement on Tuesday night saying the late-stage studies of the vaccine had been paused while the company investigates whether the patient’s reported side effect is connected with the vaccine.

AstraZeneca did not reveal any information about the patient’s condition other than to describe it as ‘a potentially unexplained illness’.

Car parking spaces could be painted green to promote the uptake of electric vehicles, Transport Secretary Grant Shapps has announced.

The Cabinet minister said local authorities could be given guidance on ways of highlighting dedicated parking spots for greener cars.

Other potential measures to encourage people to make the switch from conventionally-fuelled vehicles include installing more charge points at supermarkets and tourist sites, and developing batteries that can charge in six minutes. Read more here

Amazon has said that it handed £293m directly to the UK taxman last year.

The online retail giant said it contributed £1.147bn in total tax from its UK operations last year, although the majority of this was from indirect taxes.

Amazon said employer taxes such as national insurance contributions made up the biggest proportion of the £293m it paid to the tax authorities.

More than 300,000 redundancies planned in June and July

More than 300,000 people were put at risk of redundancy in just two months this summer as businesses struggle from the impact of the Covid-19 pandemic.

Figures from the Insolvency Service show that 305,427 positions were reportedly at risk of redundancy, according to filings by businesses.

It is almost seven times higher than the figure for June and July last year, when less than 45,500 jobs were at risk.

The pound has tumbled against the US dollar as concerns ramped up over a no-deal Brexit, but London’s top tier shrugged off big falls on Wall Street.

Sterling tumbled 1.6 per cent to just over 1.30 US dollars – the lowest level for nearly a month and the steepest fall since March.

London’s FTSE 100 Index clung to its opening mark, down 7.1 points or 0.1 per cent at 5930.3. Indices across Europe fared worse, with the Cac 40 in France shedding 1.6 per cent and Germany’s Dax closing one per cent lower.

Tory MPs urged to back targeted extension of furlough scheme

Newly-elected Conservative MPs are being urged to back calls for a targeted extension of the furlough scheme.

Labour will lead a debate in the Commons today calling on the government to introduce targeted income support to businesses and self-employed people in sectors which have been most affected by coronavirus.

The party also wants extra income support to be given to areas of the country placed under local lockdown restrictions.

More than half of drivers exceed 30mph limit, research finds

Department for Transport (DfT) analysis of these roads across Britain found that 54 per cent of cars were driven too fast during free-flow conditions last year.

There will be blustery showers in northwest areas early with some patchy rain for Wales and Northern England to start, says the BBC. It will be generally dry and warm elsewhere as high pressure starts to move in.

Tonight, it will be generally clear in most areas, but cooler as winds diminish to light.

Tomorrow there will be showers and it’ll be breezy in the northwest. It will be sunny to start elsewhere then cloudy through the afternoon, but it should be dry and cooler.