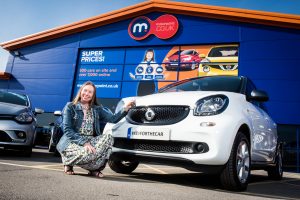 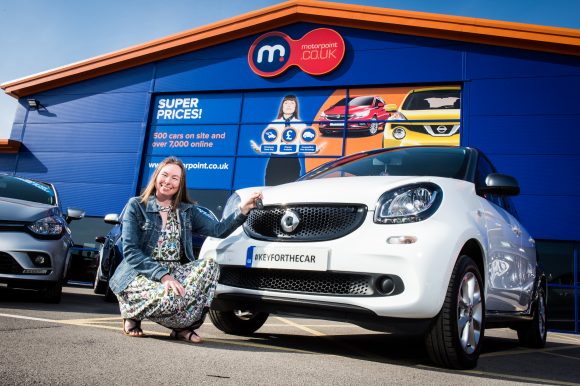 AN assistant head teacher from Wakefield has driven away with Motorpoint’s 21st birthday star prize.

Helen Boutle, who works at St Michael’s CE Academy, was chosen at random from hundreds of people across England, Scotland and Wales to win the top-of-the-range 1.0 Smart Forfour Passion.

The independent car retailer ran the competition to celebrate its 21st anniversary. To be in with a chance of winning, entrants had to visit their nearest Motorpoint branch between April 5 and 22 and search for the hidden key. Once they had found the key, they needed to upload a photo of themselves with the key on to either their Facebook or Instagram page with the hashtag #KeyForTheCar. The winner was announced live on Facebook.

‘I still can’t believe I’ve won,’ said the delighted mother-of-three, who has worked in teaching in West Yorkshire for the past 25 years. ‘I had popped into Motorpoint in Castleford with my dad over the Easter bank holiday to look for a new car, and while I was there I decided to enter the competition as I’d just won a competition at my local WI and thought my luck might still be in. It definitely was as I’ve won myself a Smart Forfour!’

General manager Mick Martin-Roebuck said: ‘We couldn’t be happier for Helen. She is absolutely over the moon to have won the Smart Forfour in our 21st anniversary giveaway. We would also like to thank the hundreds of other people who came to our network of branches to enter our competition. We really appreciate everyone’s time and effort. Together, you helped us make our anniversary one to truly remember.’