SW Car Supermarket has bought two sites in Peterborough to expand its used car offering – with more jobs in the offing as well.

Both are within a stone’s throw from the SW Car Supermarket branch in the Fengate area, with the first one – an ex-engineering company that will provide extra handover and workshop space – next door to the showroom itself.

There are even bigger plans for the second site. What was scrubland less than a mile away has now been cleared for development, with contractors poised to begin building work.

The new site will also see SW Car Supermarket branching out into the used van sector.

Anton Khan, chief executive of the SW Car Supermarket Group, said: ‘Given the current circumstances, it’s an exciting start to the year for us, which is set to completely change the dynamic of our business.

‘In order to expand and continue to give customers plenty of choice, we need to have a wholesale approach to what we do.’ 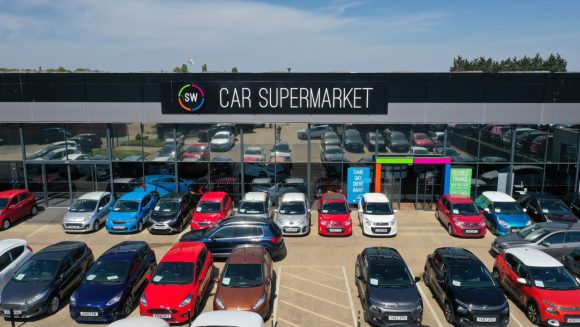 John Marshall, director of operations at SW Car Supermarket Group, added: ‘What was a large engineering company is set to become our brand-new handover and workshop site, which will take us up to 25 service ramps.

‘The much-needed additional workshop space will mean that we can effectively handle up to 40 or 50 cars a day, which will be a fantastic increase for us.’

Speaking about the second site, Khan said: ‘Acquiring this land has been really exciting for us as it is no distance at all from our SW Car Supermarket premises.

‘At just under six acres in size, the site is huge – and to think, until very recently it was just scrubland.

‘We’re very excited at the prospect of offering commercial vehicles and expanding our choice to customers.’

Drone footage has captured the scale of the build:

Both new premises will see the SW Group employing up to 50 more members of staff from the area.

Marshall said: ‘In order to open and operate our two new sites, we’ll be recruiting an additional 40 to 50 team members, which given the current circumstances in our country, we are very pleased to be able to do.

‘Our policy is to recruit locally, so we hope to be able to begin this process very soon.’

Construction work aims to be completed by the end of February, letting SW officially open its two new sites in March.