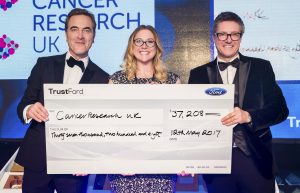 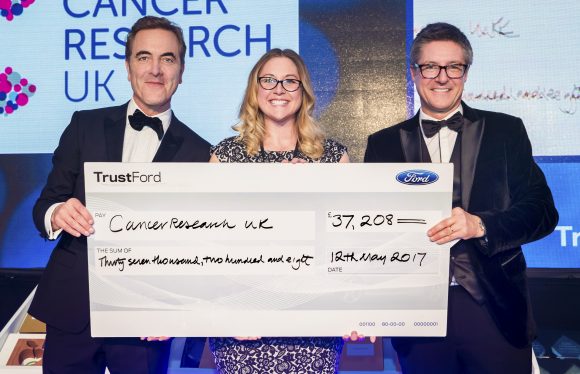 COLLEAGUES from TrustFord came together in May to celebrate the business’ annual Excellence Awards, which recognise exceptional talent within the business.

The awards ceremony, which took place at the Crowne Plaza Hotel in Stratford-Upon-Avon, was hosted by actor James Nesbitt and TrustFord chairman and CEO Steve Hood.

During the event, it was announced that TrustFord raised almost £100,000 throughout 2016 for BEN, the automotive industry charity and Cancer Research UK, the dealer group’s official charity partner. Cheques were presented to each organisation by Nesbitt and Hood. The funds were generated with the help of TrustFord’s colleagues from up and down the country, who got involved with a variety of local and national events throughout the year.

TrustFord Epsom, TrustFord Enfield and TrustFord Stockport took home at least three awards each, while operations director John Leeman picked up the prestigious Chairman’s Award which recognises colleagues who have made an exceptional contribution to the business. John was awarded for his individual performance and commitment to the wider TrustFord family.

Hood said: ‘We host our annual awards each year to recognise the brilliant achievements and hard work of colleagues across the business. As a TrustFord team we are all incredibly proud of this year’s winners and their leadership in our business.’

MORE: A pioneering mind-set is vital to success in today’s fast evolving marketplace

On SuperUnleaded.com: Young boy drives Hilux back home – or does he?