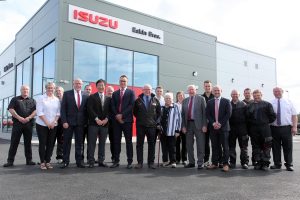 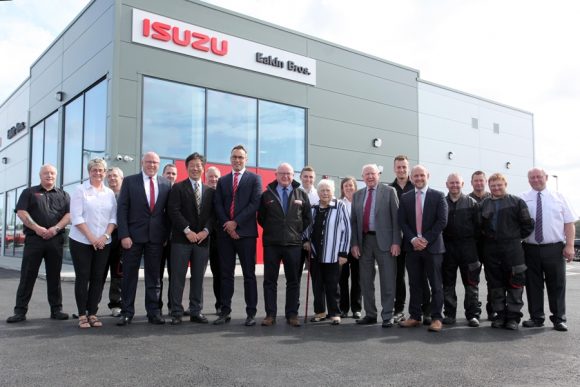 A PAIR of Isuzu dealerships in Northern Ireland have had their new premises officially declared open by two of the brand’s managing directors.

The manufacturer bosses flew in from Germany and England to launch the purpose-built sites being run by John Barr Cars in Antrim and and Eakin Bros in Maydown.

Mikio Tsukui, the managing director and CEO of Isuzu Europe, flew in from Germany and said: ‘It is a great honour to have our dealers investing in their futures with Isuzu. Both dealer operations are state-of-the-art new-builds and are located in prime locations.

‘Both dealers are highly regarded in our network. Eakin Bros have an outstanding 96-year pedigree, are third-generation motor dealers and have represented Isuzu from the brand’s earliest days in the UK. 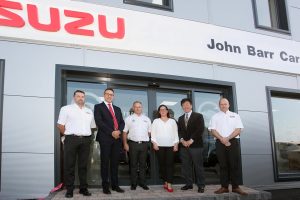 A big day for the team at John Barr Cars!

‘John Barr Cars is a young company that has expanded rapidly and consistently with Isuzu and in a short time has outgrown each of their previous locations in Dundrod and Crumlin through consistently high sales. They are both top-class representatives for our brand, and a pleasure to have within the global Isuzu family.’

‘Of course, our network is not just about glamorous buildings, and year after year John Barr Cars and Eakin Bros have won multiple Dealer of the Year awards in both sales and aftersales by delivering good old-fashioned customer service and paying thorough attention to detail in every aspect of their businesses.’

Peter Eakin said: ‘I’d like to thank Mr Tsukui and Mr Brown for coming here to declare our new site officially open. It means so much to our staff, customers and the Eakin family. It is overwhelming to have Isuzu’s Japanese MD make the first ever visit to Northern Ireland by a Japanese director and speaks volumes about how important our market is to Isuzu.’

John Barr said: ‘Thank you to both managing directors for visiting together. My team worked late into the nights to ensure everything was ready and shipshape. The last few months have been a delight seeing all the plans come together and we are truly pleased to finally be operational in our new home.’