With many commuters continuing to avoid public transport, the used car market is showing no signs of slowing down.

Most dealers we are speaking to at the moment are hungry for quality stock they can purchase quickly to sell on to customers.

To help dealers understand which cars are most in demand at the moment and which seem to have fallen out of favour, we’ve taken a deep dive into August sales on Motorway, which we can exclusively reveal to you here.

Looking back at August, the stock that consumers were looking to sell the most were cars in the £5-10k bracket, and with so much stock available at this price, dealers were able to snap up some great bargains, under CAP.

Elsewhere, most other value brackets were nudging over CAP every day in our daily auctions for dealers.

While the £40-50k-value segment in general seemed most in demand, averaging almost three per cent above CAP, sub-£5k cars are still gold, with bids holding steady day after day.

In fact, when we looked at examples of specific models that got dealers revving their engines to secure the highest bid, we found that half of the cars in our Top 10 were sub-£5k.

That isn’t to say all those cars were traditional budget models. In fact, quite the opposite is true.

From Mercedes and BMWs to VWs and Fiats, dealers have been snapping up all makes, models and ages in this bracket. And the overall winner for August? Look no further than the Audi TT.

While on average, Audis tend to go for CAP on our platform, one particular Audi TT had dealers really gunning for it, resulting in a final bid going for way above CAP!

It’s most definitely not a one-size-fits-all approach in the sub-£5k bracket at the moment, and when it comes to getting what they want, dealers are not backing down. Value is king.

Looking further up the food chain, the two highest-value models that made it into our Top 20 most in-demand cars over the summer were the Audi RS3 and the Porsche Macan.

With interest rates staying low, it seems high earners are continuing to treat themselves to expensive prestige vehicles.

In the £50-75k bracket, a Porsche Cayenne performed the best, with the closing bid 11 per cent above CAP.

An example of a Range Rover Evoque – once the status symbol of the school run – only just scraped into the Top 100 at no 87, although it still went for just over CAP.

But what about the cars that aren’t faring so well at auction? We looked into that too.

While an Audi TT topped the chart, it was an Audi A3 Sport that came out bottom, clearing just 68 per cent of CAP and also featuring in the sub-£5k bracket.

At the lower end, while damage and history plays more of a part, we were surprised to see example variants of top models like the Renault Kango, Mazda CX-5, VW Touareg and the Nissan Qashqai all relegated to bottom of the league in August.

A few of the vehicles struggled to reach beyond 75 per cent of CAP.

That’s not to say dealers out there should avoid acquiring these cars. On the contrary, there are some great deals to be had if there’s less demand from other dealers bidding against you.

Motorway looked at all the vehicles in the month of August 2020 to see which specific individual vehicles fared the best at auction, driving the final sale price up and over CAP.

The list of the top 20 highest as well as lowest bids vs CAP on individual cars in August 2020 is below: 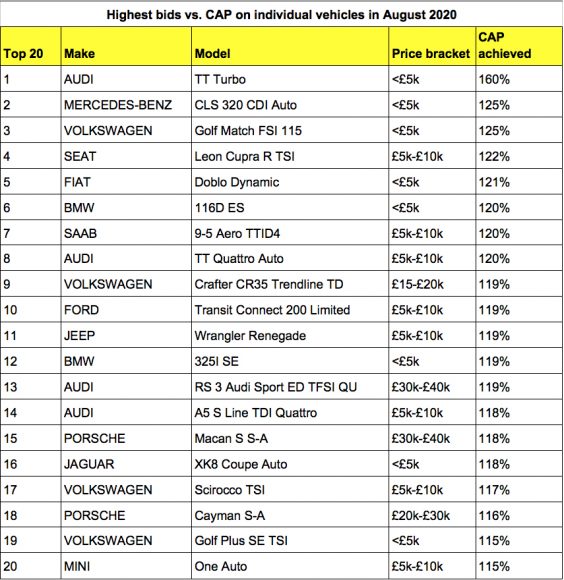 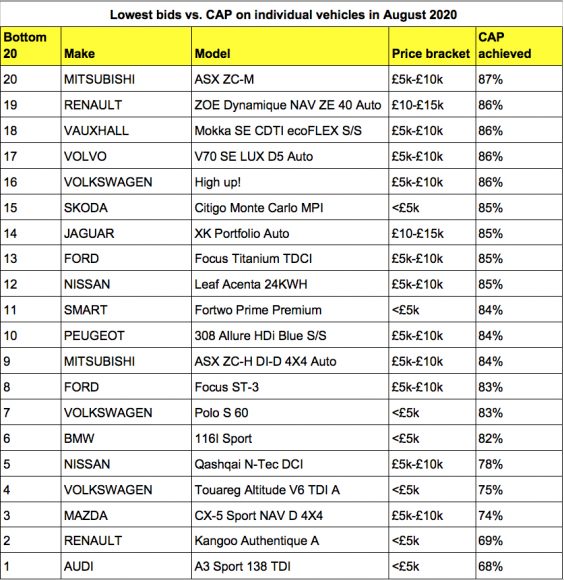 If you want to stay ahead of the competition and buy exclusive, privately owned stock, sign up to Motorway Pro here.

We’ll be back next month to look at how September has fared and which cars are ‘hot or not’.