The UK’s used car market rose by nearly one per cent in the third quarter after nine straight quarters of decline, according to the latest figures released today by the Society of Motor Manufacturers and Traders.

Demand for diesel models was up 1.4 per cent in the quarter with 858,442 changing hands, while petrol sales were flat with a slight drop of 0.2 per cent. Plug-in electric and hybrid models showed a solid increase of 13.0 per cent, totalling 37,589 units and increasing their share of sales to 1.8 per cent from 1.6 per cent in 2018’s third quarter.

Superminis remained the most popular segment, reflecting the trend in the new car market, with 684,929 changing hands and accounting for 33.0 per cent of transactions. The lower-medium and upper-medium segments were the next most popular, with 27.0 per cent and 11.7 per cent shares respectively. Meanwhile, the dual-purpose segment showed the largest percentage growth (15.2 per cent) with 11.6 per cent market share. 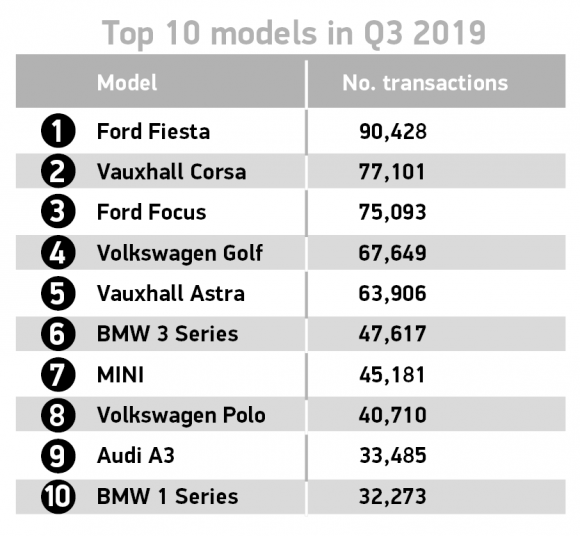 The stronger third-quarter performance wasn’t, however, quite enough to offset declines in the previous two quarters, with 51,785 fewer transactions in the first nine months of the year and the market down 0.8 per cent. Despite the recent weaker demand, though, at 6,130,762 units, the market remains at a relatively high level, said the SMMT.

Chief executive Mike Hawes said: ‘This growth, following a prolonged period of decline, is encouraging and it’s great to see a growing appetite for plug-in and hybrid models as they start to filter down to the used market. However, ongoing economic uncertainty and growing confusion over local clean air zones make it difficult to predict the future.

‘To make meaningful environmental gains, we need to get more of the latest, lowest-emitting cars on to our roads, replacing older ones quickly – and that means delivering the right conditions and policies to give new and used buyers confidence to invest in the vehicles that best suit their driving needs and budgets.’

Commenting on the figures, James Fairclough, chief executive at AA Cars, said: ‘The new car market’s loss is proving the used market’s gain. As new car sales shrink, these robust used sales figures show many buyers are being strategic and are seizing on the wide range – and quality – of second-hand cars currently for sale.

‘Supply is healthy and prices are often very competitive, with many dealer forecourts bristling with nearly-new models – which can offer strong value and are proving particularly popular.’

Meanwhile, Auto Trader commercial director Ian Plummer said: ‘At a time when the new car market is struggling, it’s reassuring to see such a solid performance in used cars. At nearly four times the size of the new car market and with the potential for greater margins, the used market remains the biggest opportunity for retailers in the closing months of 2019.’

Sue Robinson, director of the National Franchised Dealers Association, stated: ‘It is positive to see used car sales perform well in the third quarter of the year, but lack of clarity affecting consumer confidence in the new car sector must be addressed.’

Alex Buttle, director of car-selling comparison website Motorway.co.uk, added: ‘The used car market may well have seen a Boris bounce in July as Theresa May stepped aside on 7th June and it was clear by the end of June that Boris Johnson would be the next PM.

‘Unfortunately, the summer buying bonanza was short-lived. By September, any confidence that had been injected into the market by the Boris effect had begun to wane, when it became apparent the Brexit deadline might be missed and it was clear we were heading towards a general election.

‘We’re now facing more uncertainty until 12th December, when the UK car market once again needs the certainty of a stable government and a clear Brexit strategy to come together. The last outcome the car industry needs is a hung Parliament and another lengthy period of confusion.’

MORE: Revealed – The contenders and categories for this year’s Used Car Awards!