Home > News > Used car prices record record growth as they climb 1.9 per cent during May

Used car prices record record growth as they climb 1.9 per cent during May

Used car prices have recorded a record year-on-year growth as they climbed 1.9 per cent in May and increased again on the marginal rise in April.

That figure is a 1.9 per cent rise year-on-year and follows a similar marginal rise on 0.1 per cent in April. It shows that dealers are not only holding firm on their prices, but some are actually increasing them.

Reports this week have suggested strong demand from customers as they’re allowed back into showrooms and there is already a concern in the trade that restocking used cars will be difficult.

Auto Trader’s Richard Walker, director of data and insights, said: ‘Given the negative impact it could have had on the financial health of the market, it’s a huge relief to see that despite the huge pressure over the last 10 weeks, retailers have remained firm and resisted the urge to lower prices.

‘And with consumer demand surging this week, it’s clear it was absolutely the right decision.

‘With trade auctions remaining closed, the challenge retailers currently face will not be selling cars, but rather restocking them. Such high levels of demand, coupled with a low level of supply, retailers can afford to continue holding firm.

‘Retailers should be confident in their pricing and use accurate and up to the minute data, tools and insight to back up their pricing decision.’ 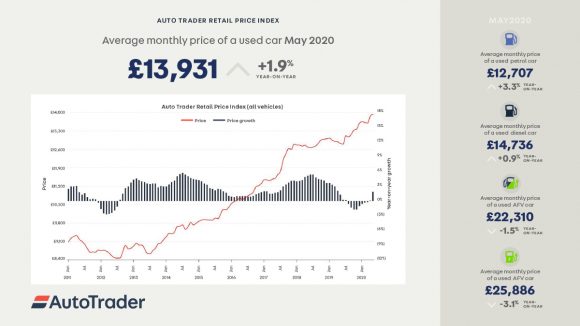 Last week the number of retailers changing prices of their cars listed on Auto Trader was down 54 per cent on the same period last year.

A spokesperson for Auto Trader said: ‘Rather than slashing prices, Auto Trader’s data scientists have observed the number of car retailers making price changes, the number of vehicles being repriced, and the value of price adjustments made over the last 10 weeks has been significantly lower than normal trading conditions.’

Auto Trader says all the signs point towards ‘renewed confidence’ in the market and ‘high level of consumer demand’.

Auto Trader has seen an average of 1.7m visits to its classified listings every day – a five per cent year-on-year increase – with a peak of 1.8m on the June 1, the day dealers reopened.

The news from Auto Trader follows that from eBay Motors Group who told Car Dealer Live on Tuesday that they have also seen used car prices remaining stable in May with most models increasing slightly. You can see what they said in the video above.

Experts from eBay Motors Group looked at the 50 most popular used cars on the sites it runs and found prices increased by 0.7 per cent.

Dermot Kelleher, head of research for the group told us – that independent dealers pushed up their prices the most – by 2.7 per cent – while franchised dealers dropped their used car prices by 0.6 per cent.