The used car market rocketed by 11.5 per cent to more than 7.5m transactions in 2021, according to figures released today (Feb 8) by the SMMT.

A total of 7,530,956 vehicles changed hands – 777,997 more than in 2020, which suffered worse from the lockdowns plus unsettled consumer and business confidence.

The fourth quarter rounded off a volatile year for the market, with transactions falling by 3.1 per cent to just over 1.6 million, as semiconductor shortages impacting on new car sales in the second half of the year squeezed used stock supply.

The second quarter was the best Q2 on record, said the SMMT, and the busiest period of the year – with 2.1m transactions – as the UK emerged from renewed lockdowns.

May was the highpoint as 769,782 cars found new keepers, while December’s performance dropped by 10.2 per cent, thanks to a rise in Omicron cases and restrictions increasing.

Annual demand for battery-electric and plug-in hybrid electric vehicles hit record levels, growing by 119.2 per cent and 75.6 per cent to 40,228 and 56,861 transactions respectively.

Hybrid-electric vehicle transactions, meanwhile, rose by 50.3 per cent to 137,639 – another new high.

Regionally, the south-east and north-west of England plus West Midlands were first, second and third respectively for used car sales in both the fourth quarter and the whole of 2021.

Regionally for the year, they were as below: 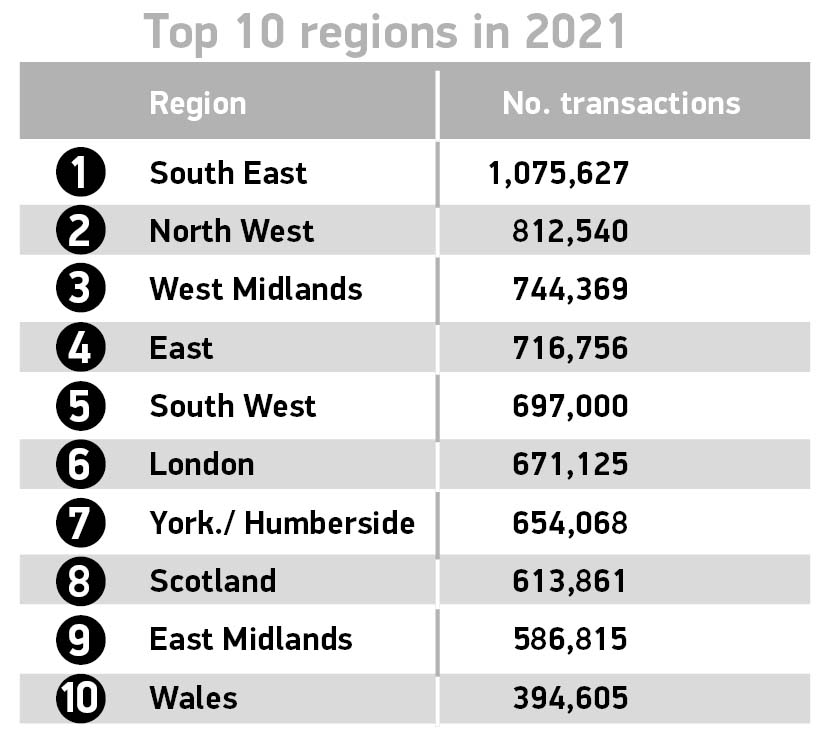 The SMMT said the growth was driven by more ultra-low and zero-emission models filtering through to second owners. Combined, they represented 3.1 per cent of the market.

Used petrol and diesel powertrain transactions went up by 10.7 per cent and 9.8 per cent respectively, with a combined 7,277,291 units changing hands.

That meant that even with record demand for alternatively fuelled vehicles, 96.6 per cent of all used car sales were still petrol or diesel models.

SMMT chief executive Mike Hawes said: ‘It’s good to see the used car market return to growth, even if activity is still below where we were pre-pandemic.

‘With the global shortage of semiconductors set to ease later this year, releasing the squeeze on new car supply, we expect more of the latest, cleanest and zero-emission models to become available for second owners.’

The Ford Fiesta and Vauxhall Corsa were the top-selling used cars for both the year and the fourth quarter. 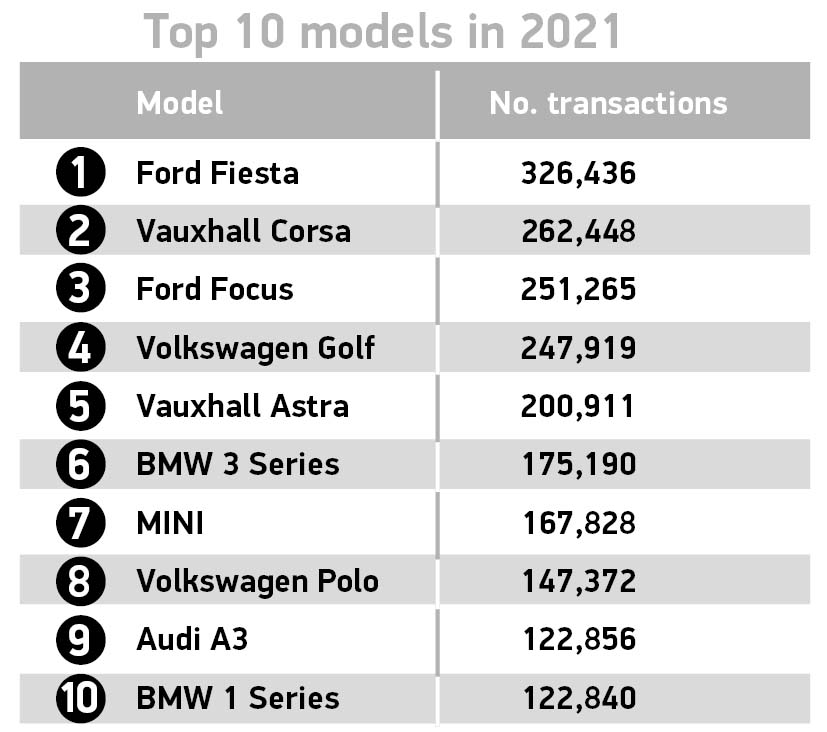 Hawes added: ‘The demand for personal mobility has undoubtedly increased during the pandemic, so it’s vital we have healthy new car sales to drive fleet renewal and the used car market if we are to improve air quality and address climate change.’

Superminis were still the most popular body type in 2021, taking nearly a third of the market at 32.7 per cent.

2021 will be remembered as defining year

It’s easy to forget that physical forecourts were closed for over three months last year.

And just as the market returned to some semblance of normality, the worldwide supply shortage of semiconductors hit new car supply very hard and with quick and deep knock-on effects on the used car market.

Even with increased demand, such a strong performance is remarkable.

I have no doubt 2021 will be remembered as a defining year for the used car market, as we saw the steps it was forced to take to embrace digital solutions pay off in a big way.

By the closing weeks of the lockdown, retailers were often hitting around 90 per cent of normal sales volumes.

Despite supply issues, demand remains strong, with thousands of drivers choosing to buy second-hand rather than wait for a new car.

For buyers who don’t want to wait weeks, or even months, to get behind the wheel of a new car, the used market’s trump card is instant availability.

A second-hand car can be seen, test-driven, bought and driven away all on the same day.

‘Choice is improving too, and the SMMT data shows that as more EVs enter the used market they are quickly becoming buyer favourites – and this bodes well for 2022.

Prices will begin to level off

That’s of course good news for those sellers that can find a replacement newer car to buy, but presents an additional cost challenge for some consumers whose budgets are being squeezed on a number of fronts.

As supply chain problems eventually ease, more new cars will be produced, more used cars will enter the market and their prices will begin to level off.

With new car supply not expected to improve before late spring at the absolute earliest, the only realistic option for car buyers continues to be the pre-owned market, where they are discovering the trade-in value of their vehicles has rocketed.

As the final coronavirus restrictions are rolled back, it’s likely there will be greater footfall on forecourts. And it might give more buyers the confidence to finally make a purchase they may have put off as a result of the pandemic.

Yet lack of stock does remain a challenge for both dealers and consumers.