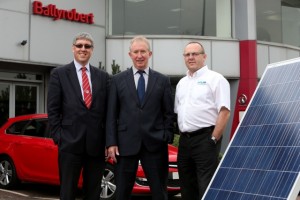 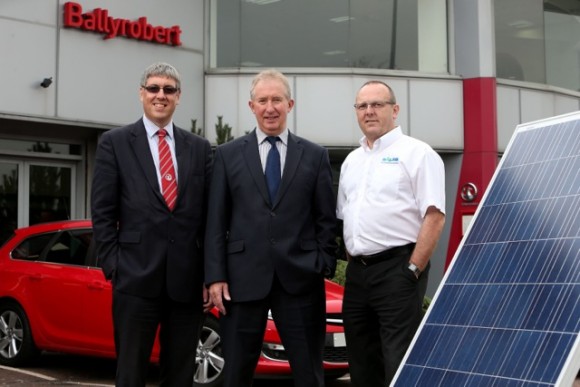 The initiative feaures an 80-panel solar system and a biomass boiler.

In addition to reducing the company’s carbon emissions, Ballyrobert Vauxhall is confident that the investment in green technology will substantially drive down operating costs at the company’s Bangor facility by at least 50 per cent.

Ballyrobert Vauxhall teamed up with SALIIS, an expert in the renewables market, to investigate the suitability of various eco technologies and to analyse the potential savings to the business.

John Lyle, managing director of Ballyrobert Vauxhall, said: ‘We are constantly striving to reduce our carbon footprint and energy costs. However, this year, we felt that the time was right to seriously invest in renewable technologies and make a major statement in terms of our company’s commitment to sustainability.

‘With the added bonus of significantly reducing our electricity costs, we decided on a ‘‘paid for’’ solar energy system that would save the company approximately £6,000 per annum.’

Investing a further £50,000 in the biomass boiler, Ballyrobert Vauxhall is expecting to have paid back its initial investment by the end of the 2016.

Brian Chittick, an energy advisor with SALIIS adds: ‘Renewable technology is a smart investment. The combination of lowering a company’s running costs with utilising green technologies is a win-win proposition, and benefits both the business and the environment.

‘For Ballyrobert Vauxhall, we have calculated that the annual approximate fuel savings by installing the biomass boiler will be around £8,500 and the RHI Savings will be over £20,500, generating with a combined return of almost £30,000 per annum.’