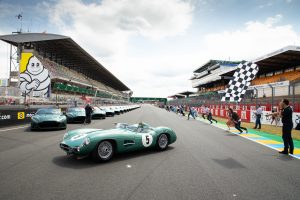 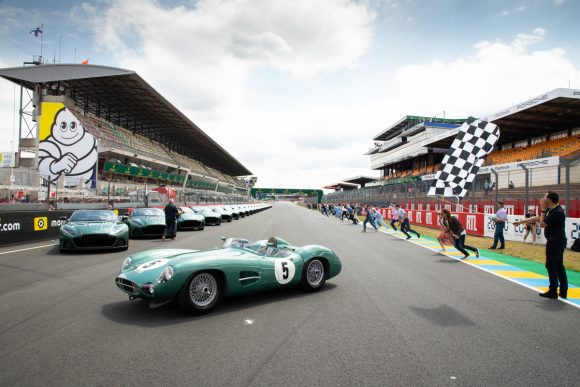 OWNERS of the limited-edition Aston Martin DBS 59 received the keys to their Superleggeras at a memorable handover at Le Mans last weekend.

It followed the success of previous commissions by Aston Martin Cambridge, including the Vanquish S Red Arrows edition and V12 Vantage S Spitfire edition. The current project honours the 60th anniversary of Aston Martin’s historic 1-2 finish in the DBR1 at the 24 Hours of Le Mans in 1959. Each car represents one hour of the iconic race, in which Roy Salvadori and Carroll Shelby took the chequered flag ahead of the sister car piloted by Maurice Trintignant and Paul Frère.

To mark the occasion, the 24 new owners were invited to a five-day event encompassing VIP flights, luxury five-star accommodation and dinner at the plush Hotel de France in La Chartre-sur-le-Loir. The new owners also took part in a once-in-a-lifetime handover ceremony, which recreated the iconic photograph from the start of the race in 1959.

In addition, owners were given the opportunity to drive their new Super Grand Tourers around the track for a parade lap ahead of this year’s Le Mans race.

Richard Eniffer, dealer principal at Aston Martin Cambridge, said: ‘Our unique handover event at Le Mans this year has been a triumph. DBS 59 strikes a careful balance between a timeless design that respects Aston Martin’s history and a modern take that celebrates its future. Each model is a stunning example of automotive excellence and design aspiration and will offer the owners a truly unique motoring experience in the years to come.

‘We were delighted to create such a memorable handover event for everyone involved and were pleased to be joined by representatives from the highly talented design and engineering teams at Aston Martin who worked with us to turn our vision into a reality. To see the sheer joy on the 24 owners’ faces as they were given the keys was the perfect ending to this commission.’

Every detail was meticulously thought through, including the recreation of seat material used on the winning DBR1. Meanwhile, bronze details such as the Superleggera bonnet badging, bespoke front grille, brake callipers and 21-inch forged Y-spoke satin duotone wheels were nods to the bronze switches and dials on the Le Mans winner.