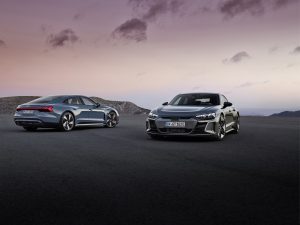 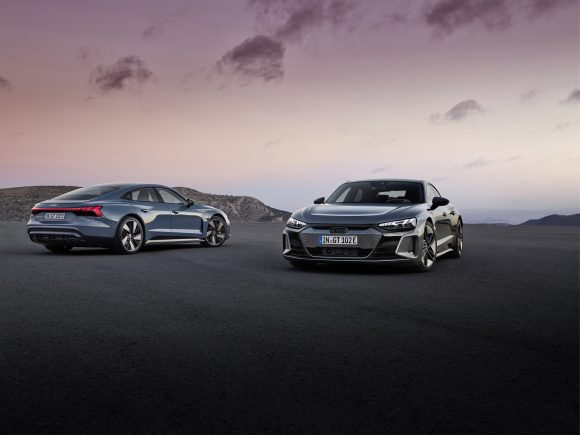 Audi today (Feb 9) pulled the covers off its eagerly awaited e-tron GT and RS e-tron GT EVs, which the manufacturer says will be ‘pioneers that will shape the future of the brand’.

Joining the e-tron and e-tron Sportback in its electric line-up, the pair of models will act as the flagship EVs and are closely based on a concept car shown at the 2018 Los Angeles Auto Show.

Sharing its ‘J1’ platform with the Porsche Taycan, the GT gets sleek styling, a wide stance and a huge front grille.

It’s also the first Audi to come with a body-coloured grille, which largely houses the car’s many driver assistance sensors, rather than being used for cooling. Meanwhile, at the rear it gets a full-length LED light bar.

Audi is promising increased interior space compared with the Taycan, while the cabin also moves away from Audi’s twin touchscreen setup, as seen on models such as the A6 and regular e-tron SUV.

That’s because it brings back physical buttons for the climate settings, although a large main touchscreen and digital dials are still included.

The e-tron GT’s cabin can also become more ‘eco’, with a leather-free package available, while recycled plastics are said to be used throughout. 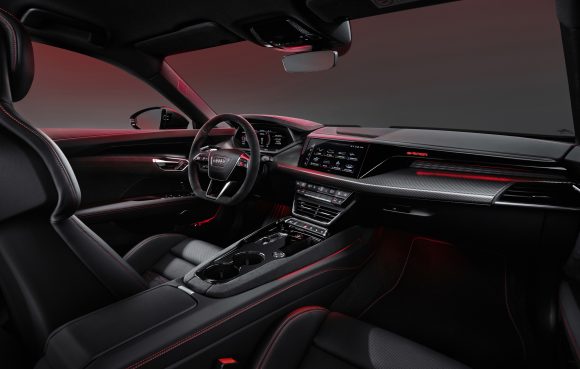 Inside the Audi RS e-tron GT

Both GTs use Audi’s quattro all-wheel-drive system, with the regular model’s electric motors producing 523bhp and 630Nm of torque when launch control is in action, and allowing for a 0-60mph time of 3.9 seconds.

The flagship RS model, which is the first electric model to wear the legendary badge, turns the power up to 637bhp and 830Nm of torque, cutting the 0-60mph time down to 3.1 seconds. The top speed of both is limited to 155mph.

These figures are, however, based on the less-accurate NEDC testing cycle, so real-world figures will be lower.

Both cars can also charge at up to 270kW, which means the battery can be charged from five to 80 per cent in ‘less than 23 minutes’ using the quickest of chargers.

Audi also says that the battery is between the axles to give it a low centre of gravity, with the model said to have a weight distribution ‘very close’ to the perfect 50:50 combination.

Elsewhere, Audi has created a new ‘sport sound’ for the GT, which generates a specific digital sound while driving that aims to amplify the experience. 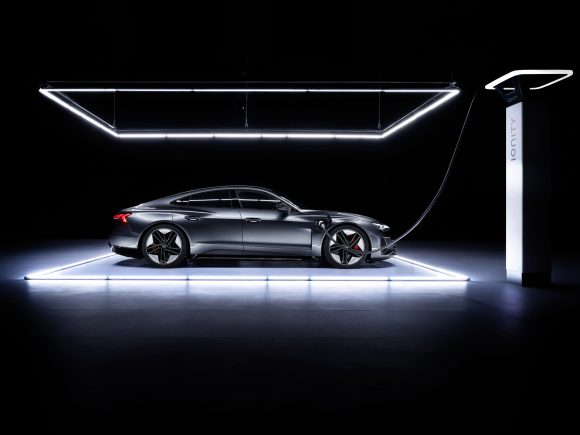 Like its e-tron GT stablemate, the RS e-tron GT can be charged from five to 80 per cent in ‘less than 23 minutes’ using the quickest of chargers, says Audi

RS models benefit from adaptive suspension and a rear-axle differential lock to improve traction and stability.

While an electric RS Audi model is likely to divide opinion, Sven Janssen, product marketing manager of the e-tron GT, justified the decision to Car Dealer.

He said: ‘We had that unbelievable car [the e-tron GT] in front of us and we were talking about the top model in our portfolio.

‘So the fact that the e-tron GT combines perfect daily usability with performance told us it had to be an RS model, as that’s what every Audi RS is. It doesn’t matter if it’s an RS3, RS4 or RS6 – that’s what it has to be.’

In our main picture, the Audi e-tron GT is on the left, accompanied by the RS e-tron GT