Average used car prices at British Car Auctions (BCA) have passed the £10,000 mark for the very first time as the market continues to soar.

The auction group says that August saw the average price of used vehicles at its sales reach an all-time high.

It marks the fourth month in a row that average used car prices at BCA saw a climb.

Historically, used car activity has been slower in August due to the peak summer holiday season and the impending plate change on September 1st.

However, largely as a result of the pandemic and ongoing production issues for new cars, the element of seasonal market swings has all but disappeared in 2021.

Stuart Pearson, chief operating officer of BCA UK, said: ‘Whilst supply and demand will always impact on commodity values in any marketplace, BCA’s rich mix of vehicles, along with a sales programme built around clear segmentation for our customers, has driven average values to new levels during 2021.

‘Our vendor portfolio contains the broadest and most diverse selection of vehicles in the marketplace and we continue to retain and win significant contracts to further strengthen the offering.

‘The current dynamics seen in the used vehicle sector are very much amplified by challenges around new car supply, and we’ve seen high levels of buying activity from the franchised dealer sector at a time when traditionally they would have been focussed on preparing for the new plate change.’ 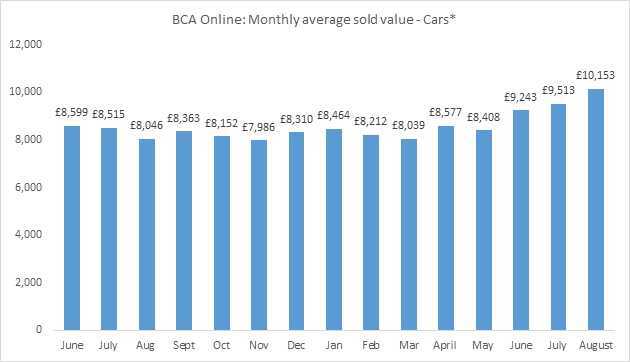 He added: ‘Buyers are also diversifying to make the most of the current retail activity levels and their purchasing is rippling through the whole value chain.

‘Whilst older stock has been fairly stable for a number of months, this sector is also now starting to shift upwards when normally the market would be easing back on the run towards Christmas.

‘We’ve reported record price levels for three consecutive months, and looking at the value progression across the used car sector during August and into the first few weeks of September, average values are likely to shift to another new level that probably once didn’t seem possible.

‘In all likelihood there will be no letting up for some months to come.’