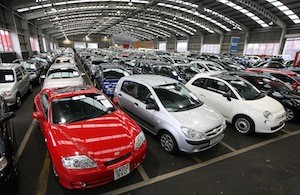 BCA expected to sell for £1.2bn

BRITISH Car Auctions is close to changing hands in a £1.2bn takeover deal.

Britain’s largest used car dealer is expected to be sold to a City of London consortium after a plan to float the business earlier this year was scrapped.

The talks are with listed consortium Haversham Holdings. Some of the City’s biggest investors, including Invesco, Aviva Investors, Artemis and Schroders, are among them. Haversham was set up last year to buy ‘substantial companies and businesses in the UK and European automotive, support services, leasing, engineering or manufacturing sectors.’

On Saturday, Sky News stated insiders had reported £1.2bn was being raising by Haversham, which confirmed it was in ‘advanced discussions, which might lead to a transaction’ on Monday morning. However, it added that there could be no certainty that a transaction would proceed.

If this deal goes ahead, it would allow BCA to gain entry to the stock market. This would also coincide with Auto Trader’s £2.5bn floating by rival firm Apax Partners.

On SuperUnleaded.com – Why Every Driver Should Be Scared Of The Nurburgring