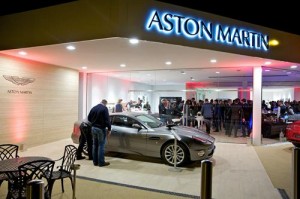 Christian Marti director of sales operations at Aston Martin said: ‘I am very happy indeed to welcome H.R. Owen Reading to the strong and growing Aston Martin UK dealer network. With the unveiling just last week of exciting new cars such as the fantastic DBX Concept, Aston Martin Vulcan and our new GT3 racing inspired special edition Vantage at the Geneva Motor Show, Aston Martin is looking forward to a bright and successful second century. H.R. Owen’s decision to extend their association with us very clearly underlines their commitment to our brand.’

Mamad Kashani-Akhavan chief executive of H.R. Owen added: ‘At H.R. Owen we pride ourselves on representing the finest marques in the world and the chance to extend our partnership with Aston Martin is an opportunity we’re delighted to have been offered. The performance of our existing business at Cheltenham, and the loyal customer base we’ve built over the years, is something we intend to replicate at our Reading site. The team and I look forward to welcoming Aston Martin owners in the area into the H.R. Owen family.’