Home > News > VIDEO: It’s a yes from us! Check out this hilarious Britain’s Got Talent spoof 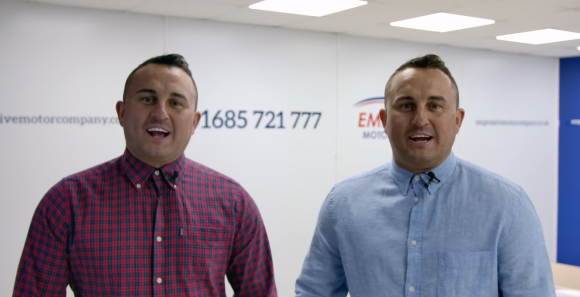 VIDEO: It’s a yes from us! Check out this hilarious Britain’s Got Talent spoof

EMPRESSIVE Motor Company has given its latest advert a unique twist, parodying the hit show Britain’s Got Talent with the help of dealership director Mark Steed.

In the brilliant spoof, Steed gives new meaning to being hands-on with his dealership’s marketing strategy.

He slips into the role of the ITV programme’s hosts Ant & Dec, as well as its judges, the newly-rechristened Daewoo Walliams, Skoda Cowell, Alfa Dixon and Audi Holden, the latter two sporting rather more stubble than they do on television!

Aside from one mis-casting – a post-2005 facelift Vauxhall Vectra playing the part of a 2002 car – the brief ad has been expertly crafted, and is receiving rave reviews from customers. Since its upload last month it has been viewed over 140,000 times on Facebook.

Importantly, while it provides a few laughs, it still gets across the point of the dealer’s part-exchange policy, which guarantees customers £2,000 when they buy a new car and trade in their ‘banger’, regardless of its condition.

The family-run dealership based in Merthyr Tydfil, Wales, has a long-standing history of using video to promote its business, with Steed taking to a rugby pitch and the turret of a tank in his many ‘Empressive’ campaigns.

MORE: It’s a turtle mystery! Rolls-Royce staff get a bit of a shell shock

MORE: Lookers predicts profit plunge of 26 per cent to £32m

MORE: End of the road for Border Cars after company hits financial difficulties