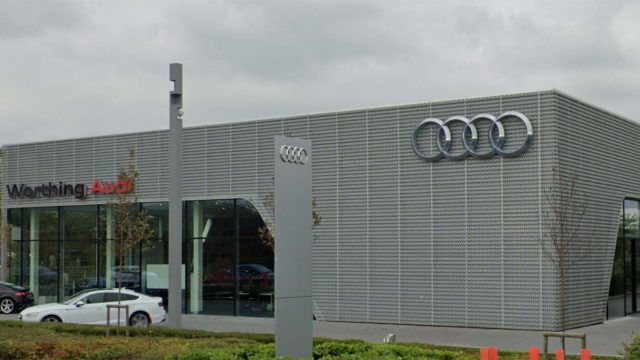 Caffyns has lodged a planning application to move a Volvo showroom to become its neighbour with Audi.

A planning statement, prepared by Strutt & Parker and sent to Arun District Council, says the current dealership had outgrown its site in Palatine Road, Goring-by-Sea, which is in the borough of Worthing.

As such, the dealership chain said it wanted to repeat the success of the relocation of its Audi dealership from the Worthing borough to Angmering, which is in the Arun district, and move the Volvo showroom there as well.

If the application is successful, the two-storey 1,315sq m showroom and workshop plus forecourt will go up on land east of Roundstone Lane and north of the Roundstone bypass in Angmering to the west of the Audi site, pictured, which retained the Worthing name when it moved.

The land Caffyns wants to use was originally given planning permission in May 2019 to be used as a temporary 67-slot overspill car park for the Audi showroom because of widening work on the A259, but ultimately it wasn’t needed, according to the statement.

Pre-application advice from the planning department said the Volvo development would be acceptable in principle.

The workshop will include an MOT and servicing bay, while the showroom will have space inside to display five cars.

Parking spaces would be provided for 69 vehicles for customers, the workshop and display.

The Audi dealership relocated from Broadwater Road in Worthing after permission was granted in October 2016 following an appeal.

Arun council said it would aim to come to a decision about the Volvo dealership by April 18 – the end of the statutory determination period – depending on planning committee schedules or ongoing negotiations.