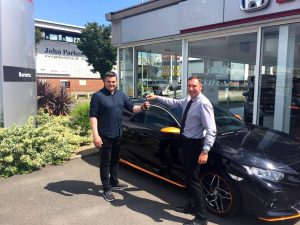 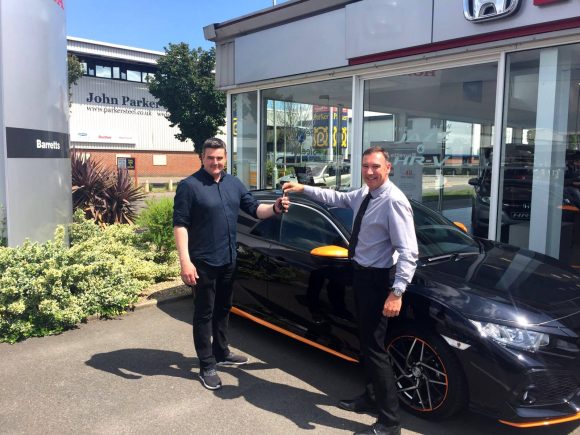 CANTERBURY dealership Barretts Honda has given away a new 2017 Honda Civic to Lyminge resident Steve Hickmott after he won a competition on the manufacturer’s social media channels.

The Civic Live Challenge, which was run on Facebook, YouTube, Instagram and Twitter, saw Honda fans from across the UK, Spain, France and Germany take part in a series of challenges during a 48-hour virtual treasure hunt to decipher a postcode where a Civic was hidden.

Using the hashtag #CivicLiveChallenge, the competition drew thousands of entrants, with Hickmott’s being chosen at random after he cracked the clues. He’ll own the Civic, with insurance included, for a year.

He said: ‘With such a great prize on offer, it was a no-brainer that I should enter this competition, but I was astounded when I was told that I’d actually won. I’ve owned a Honda Type S for the past nine years, so was on the website looking for my next Honda when I came across the competition. My family and I are booked to go on a trip to Devon in August, so I’m looking forward to putting the Civic to the test on that trip.’

Samantha Stanton, dealer principal at Barretts Honda, said: ‘It’s been an absolute honour to hand over the keys to the all-new Honda Civic and we’re delighted that it’s one of our customers that has been lucky enough to win this amazing competition.’

Nick Bennett, digital content and social media manager at Honda UK, added: ‘The #CivicLiveChallenge was not only a fun, exciting and unique way for customers to learn more about the Civic, but it also cleverly echoed the challenging spirit of the car. We hope Mr Hickmott and his family thoroughly enjoy their new car. Huge congratulations to him once again!’

MORE: Almost 100 per cent of Honda customers give their dealership the thumbs-up

MORE: Honda UK MD on new Civic – ‘Our challenge will be supply’