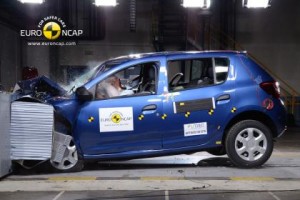 FOUR important new vehicles have been tested for safety by Euro NCAP.

In its latest round of tests, the organisation tested the Nissan Evalia, the budget Dacia Sandero, the Renault Captur and the Chevrolet Trax.

Both the Trax and Captur SUVs scored five stars, the Sandero scored four stars and the Evalia finished the test with three.

Based on the NV200 LCV, the Evalia is Nissan’s only MPV in its range. Euro NCAP testers gave the vehicle an adult protection rating of 66 per cent; 81 per cent child protection; 67 per cent for pedestrians and 55 per cent for safety assist.

Britain’s lowest-priced car, the Sandero achieved 80 per cent for adult protection and 79 per cent for child protection. However, tests only gave a 55 per cent score for the car’s safety assist rating.

The Sandero comes as standard with electronic stability control, but a seatbelt reminder system for the rear seats is absent from the list of standard equipment.

Renault’s important SUV, the Captur, was awarded 88 per cent for adult protection, 79 per cent for child protection and 81 per cent for safety assist. The latter score was thanks to stability control, seatbelt reminders on all seats and an optional driver-set speed limiter.