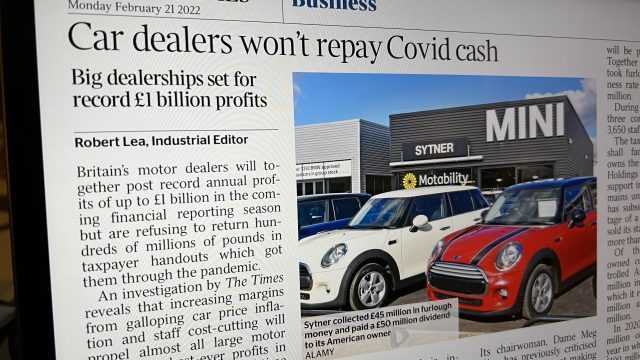 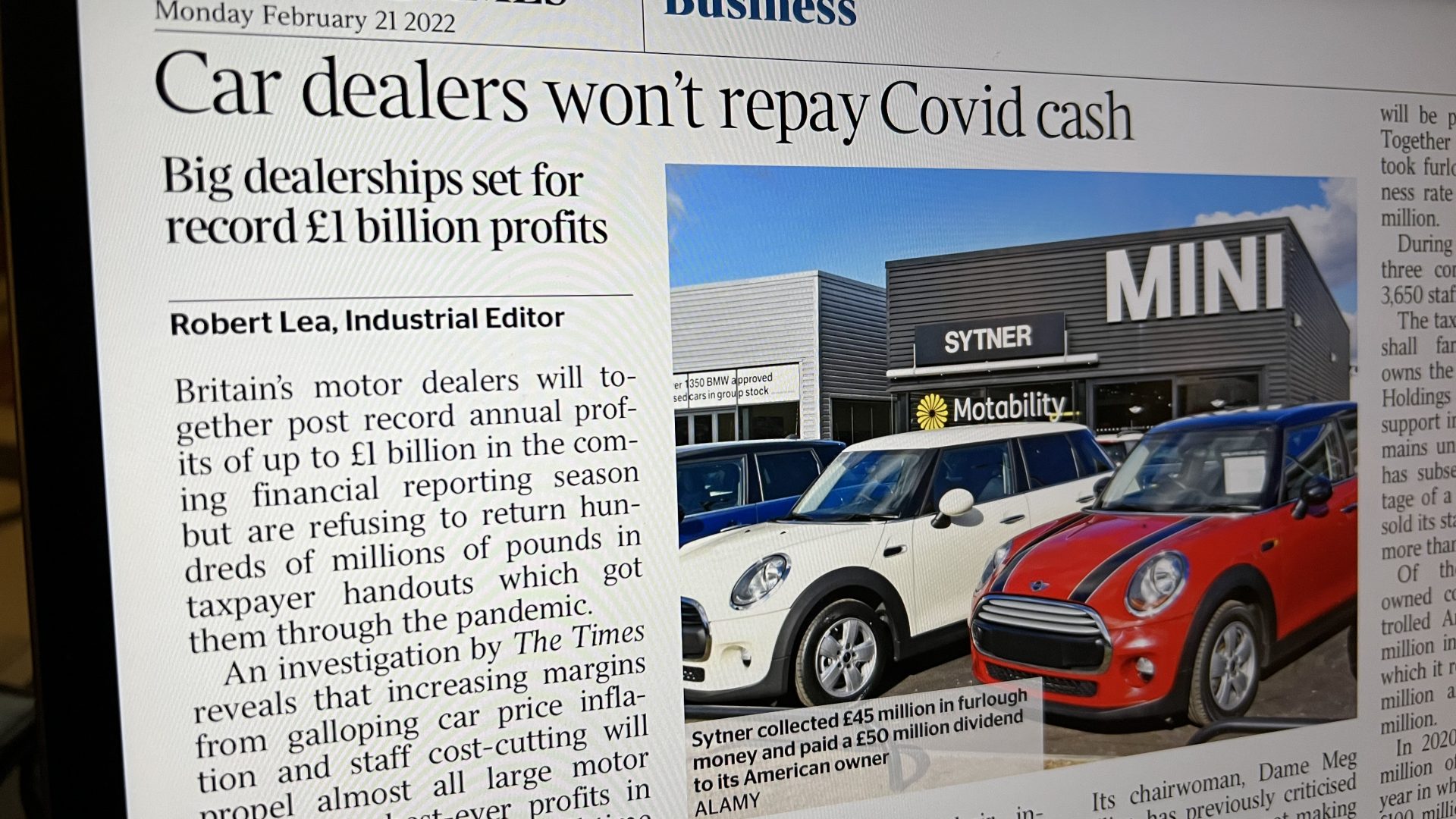 Car dealers have come under fire from a national newspaper today for ‘refusing to repay government support’.

The lead story in the business section of The Times launches a stinging attack on car dealers who have enjoyed a record 2021.

The article says that car dealers have enjoyed their ‘best-ever profits’ last year and are on track to unveil annual profits of ‘up to £1bn’ in the forthcoming financial reporting season.

‘However, not one new and used car dealer has repaid the huge sums doled out by the Treasury in furlough payments from its job retention scheme and business rates relief which kept them trading during lockdowns,’ says the article.

Car dealers were handed millions in furlough cash during the pandemic which many argue went directly to their staff to keep them employed during periods they were locked down.

They were also handed millions in retail rates relief which, for most, had a direct impact on their bottom lines with the cash banked as profit.

The Times also points the figure at listed car dealers who cut jobs during the pandemic laying off thousands of staff.

All bosses Car Dealer have spoken to recently, on and off the record, says 2021 will go down as one of the best years ever for the motor trade.

‘The fact that the big supermarkets and many other retailers returned their furlough money while the motor trade has not is likely to excite the interest of the Commons public accounts committee,’ writes The Times industrial editor Robert Lea.

The article says that the chairwoman of the committee had previously criticised the government for not making it a condition that companies should hand back money they received from the taxpayer before paying dividends.

The paper says listed dealer groups Lookers, Pendragon and Vertu will all report record profits for 2021, totalling around £230m.

‘All have signalled they will be paying final dividends,’ says the piece.

‘During the pandemic the three companies also laid off 3,650 staff.’

Car Dealer has asked all bosses who spoke to us since the pandemic whether they would be repaying furlough and retail rates relief.

Marshall Motor Group boss Daksh Gupta pledged to repay £2.6m of furlough cash and committed to repaying all £1.4m of retail rate relief received  when we spoke to him in Spring last year.

He said: ‘Given the market tailwinds from which both the group and the sector as whole has benefitted, we believe repayment to be the appropriate and responsible action to take.’

However, since then the group has been the target of an acquisition by Constellation who are taking the dealership private in a £325m deal.

The Times cites £30m of support Marshall took in 2020 and says this ‘remains unpaid’.

However, Gupta said on Twitter: ‘The amount in this article is 2020, we have repaid ALL 2021 furlough money and retail grants, no dividend were paid for 2020, no executive management bonuses paid, we repaid £10.9m of deferred VAT 18 months early etc! Furlough topped up for staff, no Covid job losses.’

Gupta was handed the Outstanding Achievement award at the Used Car Awards in 2021 for making the decision to pay back the cash.

Lookers – which laid off 1,500 staff during the pandemic – is on course to make profits of £80m, says the paper, having taken £45m in furlough and rates relief.

Pendragon is set to post profits of £80m and took £62m in furlough and rates relief while lying off 1,800 staff during Covid.

During a Car Dealer Live interview, which you can watch above, he said the board discussed it for ‘45 seconds’.

He said: ‘The government closed down our businesses by diktat with very little warning, causing considerable disruption and dislocation and they provided financial support to offset that.

‘That was what the support was there for – to make sure we didn’t come out of it in a much weaker position than we went in.

‘We are doing exactly what the government want us to do and that’s to use that money to reinvest and create jobs and be powerful as the economy grows.’

The two most profitable dealer groups in the UK, as revealed by the Car Dealer Top 100 list, Arnold Clark and Sytner, were also approached by The Times.

Neither would say whether they planned to repay furlough or business rates relief cash.

Even Constellation Automotive Group was asked if it planned to hand back taxpayer cash, but declined to comment.