Online used car ‘disruptor’ Cazoo has posted its half-year results for 2022, showing it more than doubled its losses versus the same period last year.

In its financial results for the first half and second quarter, which it released today (Aug 2), figures lay bare the extent of the firm’s losses in the first half of this year.

The business, which brands itself as making ‘buying and selling a car as simple as ordering any other product online’, shouldered a £243m loss for the six months ended June 30, 2022.

The online car dealer did improve the number of cars that it sold, though.

Cazoo also said that more than 30 per cent of its retail sales was sourced directly from customers.

In June, the retailer said it was to slash 750 jobs, end its subscription service and rationalise assets as part of a ‘business realignment plan’.

Speaking about the results, boss Alex Chesterman said he was proud of the figures but hinted at further cost-cutting plans.

‘I am very proud of what we have accomplished so far in 2022 as we continue to transform the car-buying and selling experience for consumers,’ he said.

‘We achieved record revenues and retail unit sales in Q2 and grew our market share significantly, despite the tough macroeconomic backdrop, as the consumer shift towards online car buying continues to accelerate.’

Looking ahead he said: ‘Whilst our growth remains very robust, we are laser-focused on maintaining our strong balance sheet, preserving cash and materially reducing the need for further funding as we drive towards profitability. 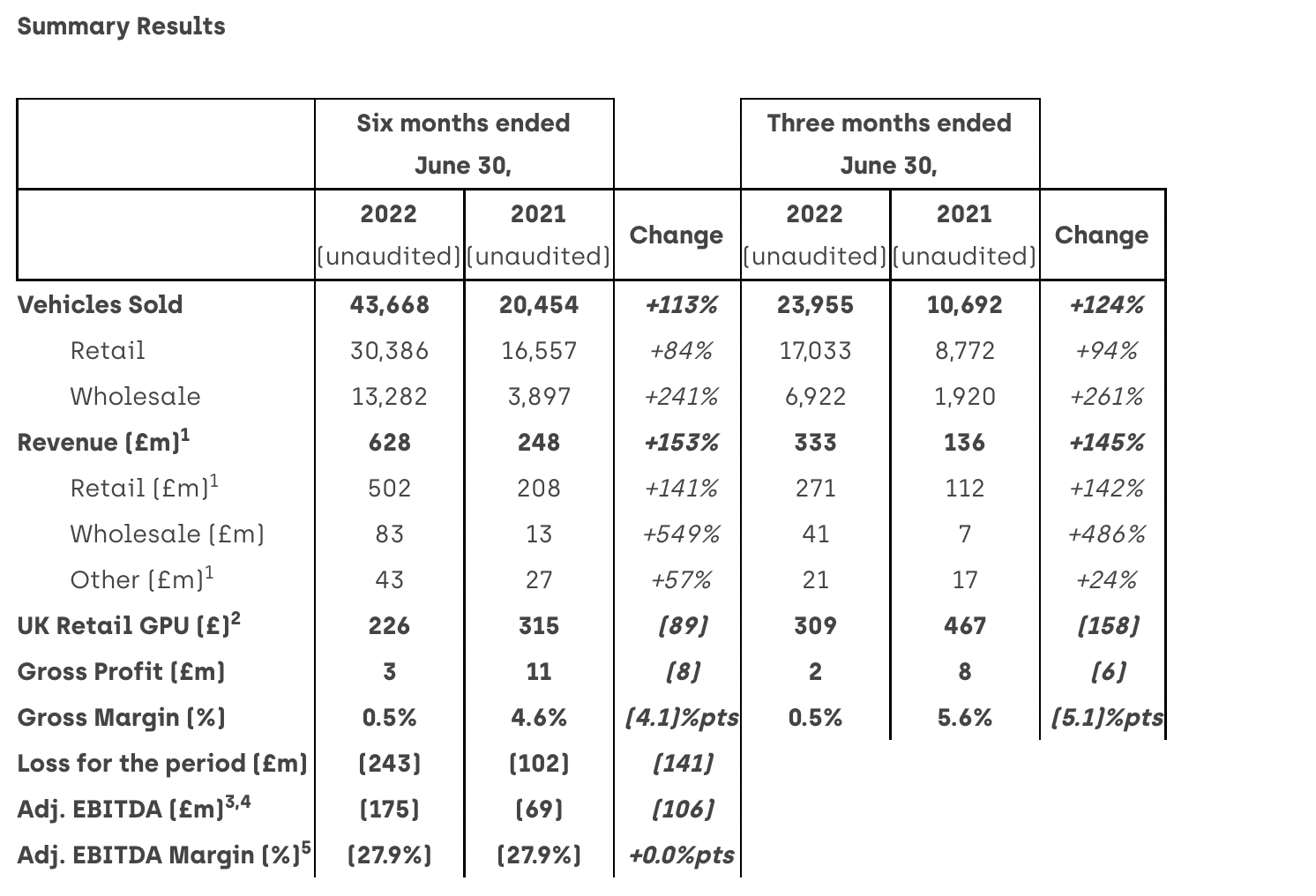 ‘We are encouraged by the positive trajectory of our UK retail GPU in Q2, which was up by 150 per cent vs Q1 2022 and we are well positioned to continue this positive momentum in the second half of the year and beyond.

‘I am particularly pleased that despite the weak economic environment affecting growth in other retail businesses and sectors, we have maintained our strong momentum into Q3 with record retail unit sales and revenues in July, whilst also growing our UK website inventory to record levels, highlighting the progress we have made with our reconditioning capabilities.’

He added: ‘Our balance sheet remains strong with over £575m of cash and self-financed inventory at the end of June.

‘However, given our focus on cash preservation and achieving profitability, we have initiated a full strategic review of our business in mainland Europe, with a view to further reducing cash burn and aiming to ensure that we have an executable plan which materially reduces any further external funding requirement.’

In the results, Cazoo also announced it has appointed a new chief financial officer – Stephen Morana will step down in Q4 and be replaced by Paul Woolf from British semiconductor company Graphcore. The full story can be found here.

Moreover, the results also contained a warning from the New York Stock Exchange on July 15 saying that the company is not in compliance with NYSE’s listing standards, which says listed companies need to maintain an average closing share price of at least $1 over a consecutive 30 trading-day period, or are in danger of being delisted.

Cazoo says it has notified NYSE of its intent ‘to cure the deficiency’, including, ‘if necessary, via a share consolidation which would be subject to board and shareholder approval’.