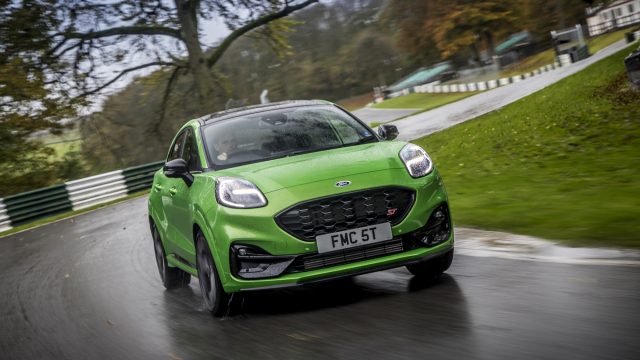 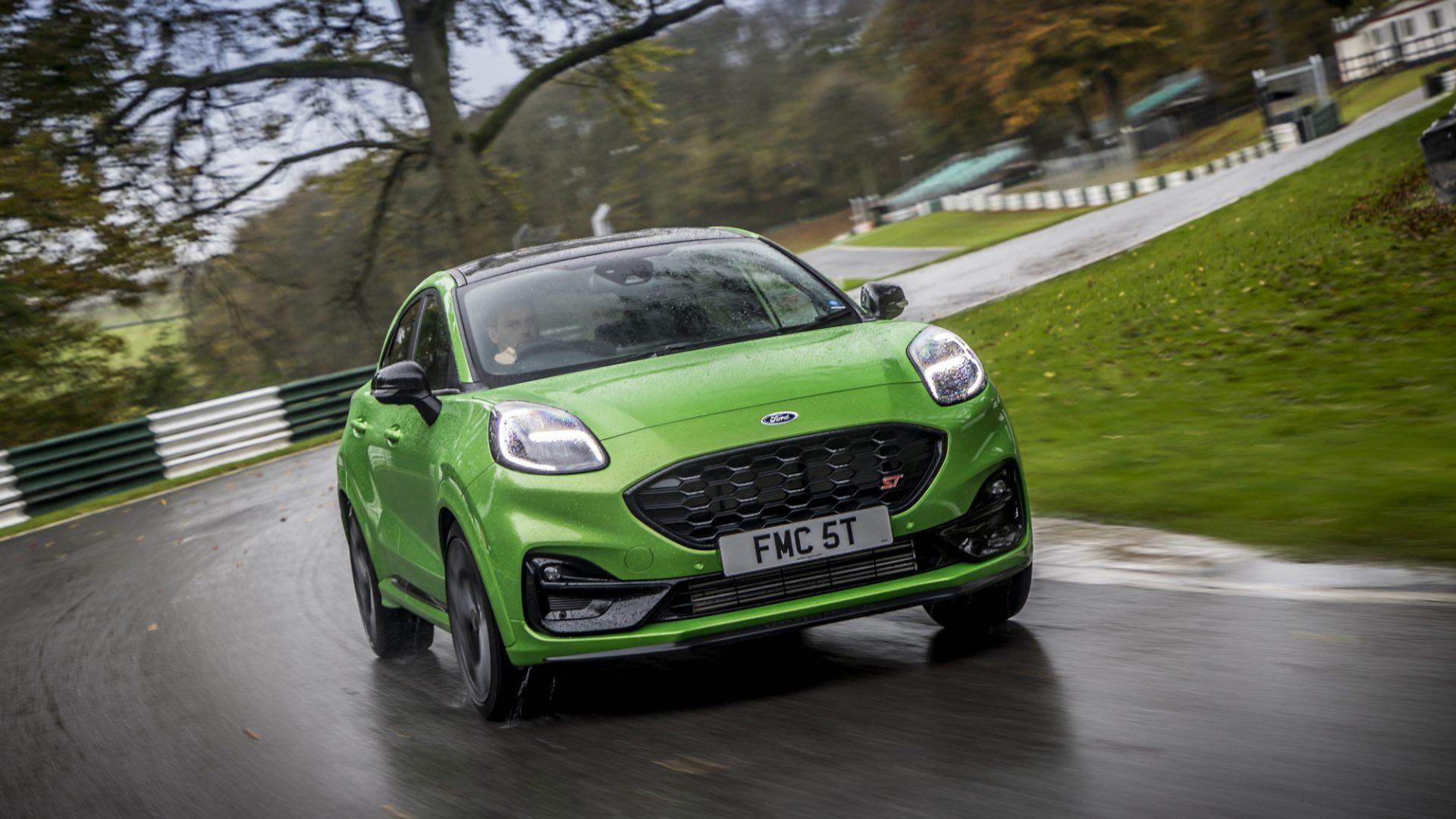 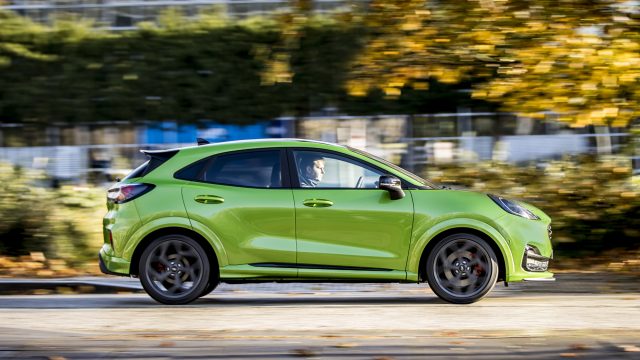 Ford has made some tremendous performance models over the years, and they’ve nearly always been based on its best-selling ‘normal’ cars. You know– the Escort, Sierra, Focus… We could continue.

But today, with SUVs and crossovers proving especially popular, we’re led to the Puma ST – the first high-riding model in Europe to be fitted with the legendary ‘ST’ badge.

With these types of models generally not being well regarded for being good to drive, can Ford change that with this latest sporty model?

It’s worth saying the Puma ST is off to a good start as even the regular Puma impresses behind the wheel, and this sportier model is actually based on the Fiesta ST – sharing that car’s engine and platform but wrapping it in a different crossover-y frock.

It’s got a raft of performance changes, too, including a faster steering response, larger brakes and big 19-inch alloy wheels wrapped in Michelin Pilot Sport 4S tyres – the latter often associated with the best performance cars. 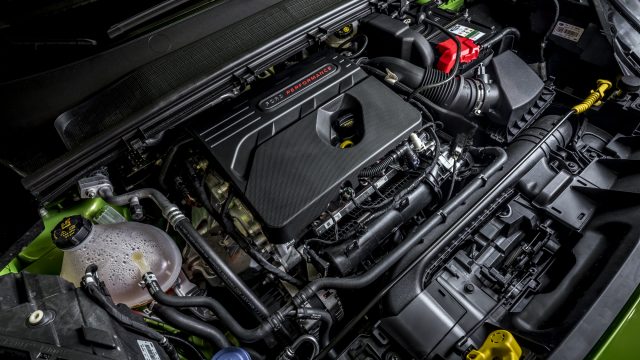 Powering the Puma ST is a turbocharged 1.5-litre three-cylinder petrol unit that kicks out 197bhp and 320Nm of torque, with that being delivered to the front wheels via a six-speed manual gearbox.

Yet because of the relatively small engine, running costs are actually quite reasonable – Ford claims 41.5mpg with CO2 emissions of 155g/km.

Like the Fiesta ST, the Puma’s also available with a £950 Performance Pack. This brings a Quaife limited-slip differential that’s able to distribute torque to the wheel with the most grip, maximising cornering ability and limiting understeer. 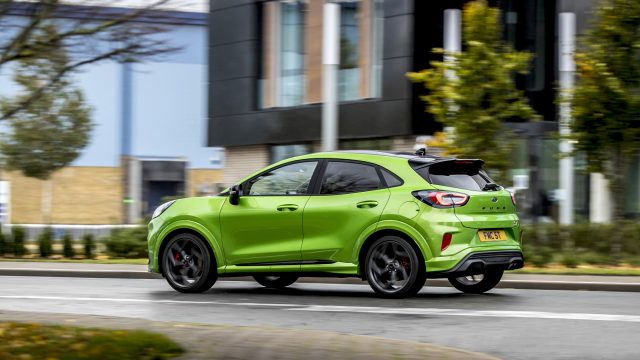 For anyone who’s not convinced about a crossover ever being decent to drive, they should take a look at this Puma.

It’s especially agile for a vehicle of this type and gives you the confidence to push on through corners like only the best performance cars can manage.

The engine is also keen and eager, while the six-speed manual gearbox is superb to use, having a really mechanical and rewarding shift to it.

The only downside to this sporty feel is that Ford has had to stiffen up the suspension quite significantly, and the result is that the Puma ST is pretty firm, not helped by the large wheels.

That said, we did several long trips with it and were never uncomfortable.

We reckon the Puma ST is a rather appealing thing, with its large grille, upright headlights plus deep splitter and diffusers really helping to give it a far more aggressive look than its regular counterpart.

There’s even a vibrant Mean Green colour available if you really want to stand out from the crowd.

Some might question just how ‘SUV’ it is, though.

Sports suspension means it actually sits quite low to the ground, while painted plastic wheel arches means it doesn’t look too different from a regular hatchback, though we reckon that’s OK… 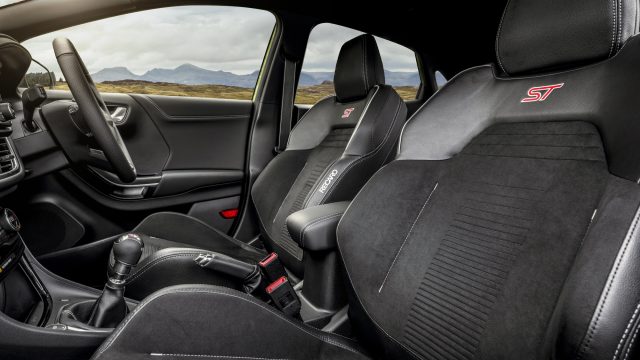 Like the Fiesta ST, Ford’s fitted some excellent leather and Alcantara-trimmed Recaro seats, and there’s also a sports steering wheel.

But aside from that, this is really just a regular Puma interior. That’s no bad thing necessarily, as you get a neat touchscreen that’s easy to use plus an impressive digital dial system, although the quality doesn’t quite feel up to scratch in places for a car of this price.

On the plus side, the ST remains every bit as spacious as the standard Puma.

Its stand-out feature is its MegaBox, which is essentially a large 80-litre storage area beneath the boot floor that’s ideal for keeping odds and ends out of the way.

It also means taller items (a bag of golf clubs, for example) can be stood upright. 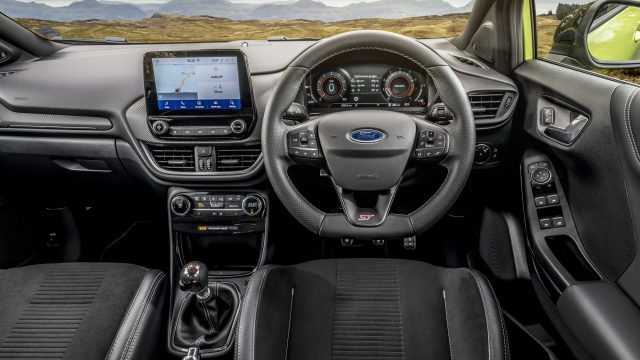 With the Puma ST sitting at the top of the range, it’s certainly not lacking in standard kit.

So as well as those large alloys and sporty bodykit, you also get features such as full LED headlights, keyless entry and heated front seats.

It’s not the bargain of the century, though, with prices starting from £28,510, and rising to around £30,000 once you’ve chosen metallic paint (the only free colour is an unappealing white) and the Performance Pack.

It means it works out at around £5,000 more than the Fiesta ST, which is a lot of money, although it manages to feel more ‘grown-up’ thanks to its larger size while occupying a good middle ground between sporty Fiesta and Focus models.

The Puma ST is a truly stellar effort from Ford. It really feels every bit as fun as the standard Fiesta ST but is far roomier inside and arguably more stylish to look at as well.

While many will likely still flock to a hot hatch, for those willing to try something a bit different, the Puma ST will be every bit as rewarding.