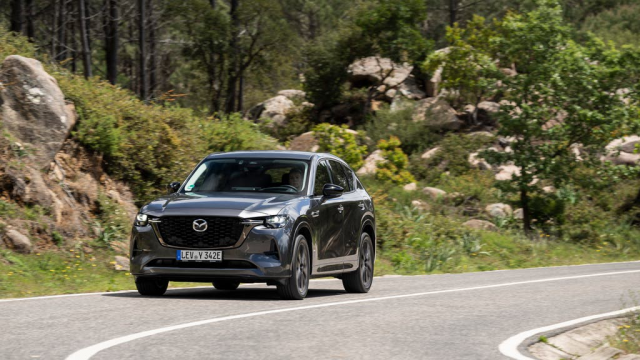 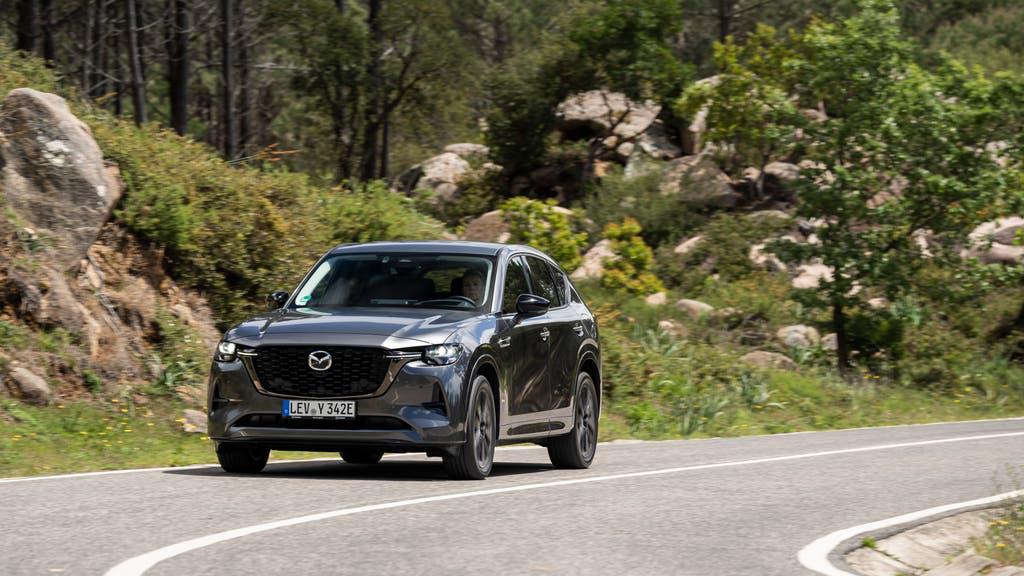 Mazda is launching its new range-topping CX-60 with the brand’s first plug-in hybrid setup. Jack Evans heads to Lisbon to try it out.

Mazda has been a little hesitant about electrification up until this point. Sure, it released the MX-30 EV and the little Mazda2 Hybrid, but it has largely been focused on its range of naturally aspirated engines elsewhere. That’s up until now, that is, with the introduction of the car we’re looking at today – the CX-60. It’s Mazda’s first plug-in hybrid and indicates a new direction for the firm, putting more emphasis on battery assistance than before.

But with a high-tech interior and a smart new design, there’s a lot more going on here than just a new engine. So let’s get to it and take a closer look.

There’s a lot of fresh new features to talk about here. Of course, that plug-in hybrid setup is a crucial talking point, but we’ll be looking at that in a little more depth shortly. Elsewhere, there are some really cool touches such as facial recognition that’ll automatically adjust your seat to the ‘perfect’ position,

The CX-60 will also be available with straight-six petrol and diesel engine options further down the line, giving a choice for those who don’t feel a plug-in hybrid would be the right fit for them. Today, however, we’ve got our focus squarely on the battery-assisted version.

The plug-in hybrid CX-60 combines a 2.5-litre four-cylinder petrol engine with an electric motor for a total output of 323bhp – making it Mazda’s most powerful production car. Plus, with a 17.8kWh battery, you should get up to 39 miles of EV-only range, with a full charge taking around four hours via a 7.2kW home wallbox.

It’s punchy in terms of performance, too, with the predominately rear-driven CX-60 completing the 0-60mph sprint in 5.6 seconds and carrying on to a top speed of 124mph. But of course, the real focus here is on efficiency, with Mazda claiming an impressive 188mpg as well as seriously low CO2 emissions of 33g/km – so it’ll be a smart choice for business users. Plus, the CX-60 is rated to tow 2.5 tonnes, making it one of the better plug-in hybrids in terms of this ability.

Off the bat it’s worth mentioning that our cars were pre-production models, so weren’t up to the final standard of the cars that you’ll see arriving in dealerships. However, it’s pleasing to note that the CX-60 – even in this pre-production setup – drove very well, with the refined powertrain favouring EV power when left to its own devices. The steering, as we’ve come to expect from Mazda these days, is spot-on, with decent weight and accuracy. It’s backed by great body control, too, with the suspension doing a great job of being both supportive yet comfortable.

It’s also very well insulated from external sounds, with wind and road noise both kept from entering the cabin. In our car, the seven-speed automatic gearbox felt a little jerky on downshifts, however, while the brakes could’ve done with a little added bite – but we expect these to be refined by the time the car hits the market.

The CX-60 is definitely recognisable as a Mazda, with its design being very in keeping with others in the range. But it’s got some good new touches to make sure that it stands out from the crowd, such as the ‘PHEV’ logos on the flanks and the large, imposing grille.

It’s physically quite a large car, too, but the variety of creases and angles disguise its overall heft. The whole car has also been designed to showcase that predominantly rear-driven setup – though it does run in four-wheel-drive too – with the CX-60’s overall stance appearing to push from the back of the car.

Mazda has applied a load of new materials to its CX-60, with other specifications of cars available with a kimono-style fabric on the dashboard. Our car, however, made do with a pretty conventional rubber-effect dash instead, but highlighted with some pleasant metal-effect pieces. In terms of spaciousness, it’s all good news up front with a nice seating position for both driver and passenger. However, in the rear things get a little tighter; head and foot space is great, but knee room is quite compromised for a car of this size.

Thankfully, boot space is pretty much on-par with rivals as the batteries have been mounted low in the car, away from the storage area. So you get a decent 570 litres as standard, or 1,726 litres with the rear seats folded down.

Mazda has a really good reputation when it comes to value for money and though the CX-60 represents quite the premium compared to its other cars, it still does well for equipment. Prices start from £43,950 and for that you get 18-inch alloy wheels as standard, as well as automatic LED headlights and a whole variety of safety assistance systems.

In terms of tech, there’s a new 12.3-inch infotainment system which incorporates both wireless Apple CarPlay and Android Auto. It’s a decent system, but lacks touchscreen control – utilising a rotary dial instead – which is fine for the in-house features, but is more annoying when you’re using those smartphone integration systems.

The CX-60 feels like a good sign of things to come from Mazda. It sparks off a whole new range of hybrids and plug-in hybrids, so really is paving the way for a new era from the firm. Does it elevate things considerably over cars like the CX-5? In terms of powertrain, yes, and it will no doubt appeal to those who can take advantage of the cost savings that an efficient plug-in hybrid like this brings.

It’s a shame, however, that it isn’t slightly more spacious in the rear – particularly given its overall size – and this does limit its appeal practicality-wise. It doesn’t move the game on much compared with rivals, but it’s definitely a fitting attribute to the Mazda range.