First drive: The new Hyundai Tucson is bolder than ever

by Ted Welford
in Car News
0

Hyundai has reinvented its best-selling Tucson to be bolder and more upmarket than ever, but is it for the better? Ted Welford finds out

It’s safe to say that Hyundai has been one of the most transformative car brands in recent years. In the early 2000s, it was famed for its cheap – and not especially cheerful – range of cars, which were bought for value alone and little else.

The end of the Noughties began to see the first real change, with more mainstream Vauxhall-rivalling models like the i10, i20 and i30 introduced, and since then things have only got better. There’s been the sporty ‘N’ division launched to much acclaim and also a range of electrified options introduced – Hyundai being well ahead of the curve with this.

And now Hyundai is looking to take a step further upmarket with its bold new fourth-generation Tucson SUV, one of its best-selling models. But is this firm really ready to make this jump?

Look at the old Tucson and this new car and you’d question if they were even from the same brand, never mind were the same model. It really is all change here, with this new SUV getting the boldest styling seen yet from Hyundai – headed up by what the firm calls ‘Parametric Hidden Lights’. They’re LEDs in the grille, basically, but vibrant nonetheless.

It’s also brimmed with the latest technology – how about  a ‘Smart Key’ that lets you drive the car, for example – and also fitted with a broad range of electrified powertrains, many of which are new for Hyundai. 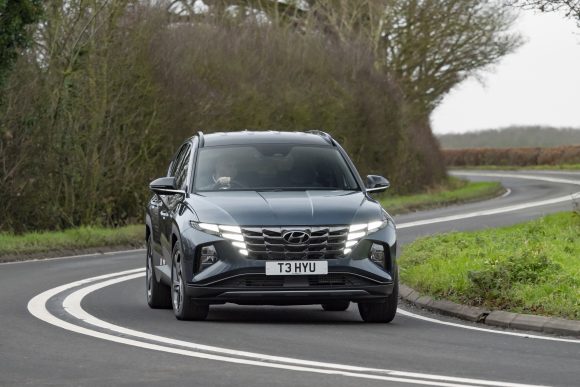 It’s a sign of the times that no diesel engine is now available in the new Tucson, with a choice of petrol, mild-hybrid, hybrid and plug-in hybrid offered. All revolve around a 1.6-litre petrol engine, and there’s plenty of choice available, too – a manual gearbox can still be selected, as is four-wheel-drive on some versions.

But powering our test is a new hybrid system – ‘self-charging’ if you want to use the marketing speak – that combines the aforementioned 1.6-litre petrol unit with an electric motor and small battery. In all, it kicks out 227bhp and 350Nm of torque, with power being sent here to the front wheels via a six-speed automatic gearbox.

Though the PHEV might have more power on paper (262bhp), its extra weight means this Hybrid is the quickest model available – hitting 60mph in under eight seconds, while also being relatively efficient for a non plug-in model of this size. Hyundai claims it will return 49.6mpg, with CO2 emissions of 131g/km. Expect closer to 40mpg in the real-world, though.

Given Hyundai’s expertise with hybrids, it’s no surprise that the electrified setup here is one of the best around. It’s smooth, punchy and refined, while also being able to run for an ‘EV’ for more time than is usual from a self-charging hybrid.

Like its predecessor, though, the Tucson isn’t a driver’s car, but rather one that’s safe and sensible, though the additional punch from the electric motor and well-kept body roll means it’s more enjoyable than its predecessor in this respect.

Annoyingly, though, all Tucson Hybrid models sit on large 19-inch alloy wheels, which means the ride can feel quite harsh and unsettled at times. It’s a shame there isn’t a smaller wheel option, as this would improve things further. 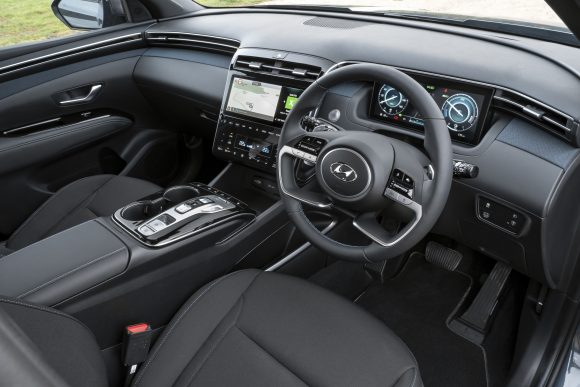 In a class where style and first impressions count for a lot, the Tucson is certainly a car to get heads swivelling. It really is a wild piece of design, and hugely different to its bland predecessor.

With its grille that lights up, an exceptionally angular design and funky-shaped wheel arches, some might think it’s a bit over the top, but we reckon it’s great. In a world where cars are often labelled as being too similar, Hyundai is proving that isn’t always the case.

Other cues of note? We like the silver strip that runs above the window line, helping to give the car a more ‘coupe-like’ look, when in fact the shape is much boxier. A full-width LED rear light bar also makes it look especially cool at night to other road users.

The cabin is the bit that must be ‘premium’ if Hyundai seeks that upmarket status, and though we’re not quite at Audi or BMW levels here, it’s definitely a big step in the right direction. The four-spoke steering wheel is an appealing touch, while the quality is largely good throughout – even if there’s a bit too much breath-on-it-and-it’ll scratch gloss black plastic that will look horrendous in a few years.

It’s also got all the latest technology, with a windscreen 10.25-inch touchscreen and digital dial system fitted to all versions, along with a new ‘touch panel’ that controls the climate settings. Because real buttons are so last year.

But none of this style is at the expense of practicality, with the Tucson having a big and roomy interior – helped by a slight increase in dimensions. The 613-litre boot here on this Hybrid model is vast, and oddly larger than the mild-hybrid models, too. 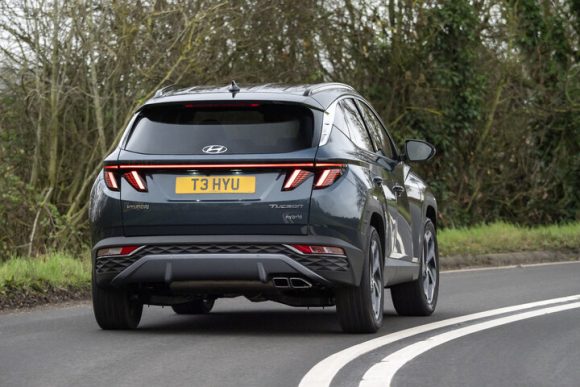 There are three grades to choose from now – SE Connect, Premium and Ultimate (tested here), and there will be a sportier-looking N-Line grade arriving later in 2021, too.

But all get a generous amount of kit, with SE Connect versions coming with climate control, a reversing camera and a range of driver assistance technology. The mid-spec Premium (our pick of the range) brings LED headlights, heated front seats and adaptive cruise control, while the flagship Ultimate lives up to its name with a panoramic sunroof, electric boot and leather upholstery.

Perhaps, unsurprisingly, this bump up the premium ladder does mean the Tucson costs quite a lot more than before, though. So while entry-level Tucsons used to cost around £23,000, today you’ll be adding £5,000 to that. Our top-spec Ultimate model also cost £37,195.

While the Tucson has certainly headed upmarket, we’re not sure it’s gone quite that far to justify that kind of money.

Given Hyundai’s managed to prove it can rival the best in the mainstream segment, it’s easy to see why it wanted to explore the more premium end of the market. With the new Tucson, it’s largely succeeded, too, with this SUV having an especially striking design and upmarket-feeling interior.

This Hybrid model here is also a great choice, delivering refinement, performance and reasonable running costs. Though top-end models are pricey, and the ride isn’t the best, this is largely a great reinvention of the Tucson, and one that’s leagues better than its predecessor.

Motorpoint delivers car to a customer’s home every 6.5 minutes since start of latest lockdown

Motorpoint delivers car to a customer's home every 6.5 minutes since start of latest lockdown