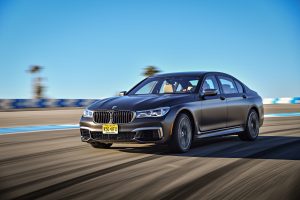 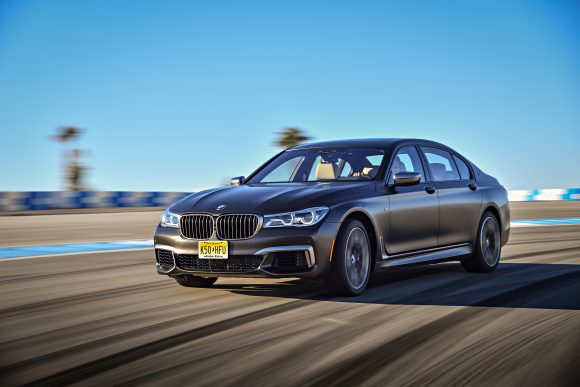 Those of you hoping this was BMW’s M7 need to look away now. Although this may be the fastest BMW the German firm has ever made, if you’re after a fire-breathing, full-blooded M car, the M760Li will leave you a little disappointed. You see, it may have that fabled tri-colour badge on its boot, but this isn’t cut from the same cloth as an M2, M3 or M4. BMW says that’s because this is a car for buyers with something of a split personality. One moment they may be keen on a country road assault so they can enjoy the glorious V12, the next they might want to kick back and relax in the massaging seats and just cruise along.

BMW made a lot of noise at the launch about it being 30 years since it installed a V12 engine in its 7 Series. And since that first unit arrived in 1987, the 12-

cylinder lump has doubled in power. The 2017 6.6-litre unit now boasts a whopping 601bhp, a staggering 800Nm of torque and is capable of propelling it to 60mph in just 3.6 seconds. That gives it the impressive title of the fastest-accelerating BMW ever – not bad for a model that’s not even a ‘proper’ M car. All that grunt does mean you’ll pay at the pumps; the M760Li will return 22.1mpg and emits 294g/km.

At £132,310, buyers would expect to get some goodies, and fortunately they do. Lightweight 20-inch alloys, a Bowers & Wilkins sound system and Car Play are included, as is an Advanced Parking system, adaptive LED headlights, a head- up display and massaging seats. There’s even rear-seat entertainment and a panoramic glass sunroof. How very generous. Naturally, there’s an extensive options list. Executive lounge seating to make rear passengers even more comfortable, night vision and BMW laser headlights are just a few of those you can tick.

The BMW is a true Jekyll-and-Hyde car, with distinct personalities behind the wheel. We tried the M760Li on the track first. Although the long, sweeping bends and snooker-table- smooth surfaces weren’t going to show off the car in anything other than the best light, it was incredibly swift for such a lump. That V12 makes a pleasing sound, and while there may be some body roll it’s not too intrusive and, for a car of this size, actually rather impressive in the way it’s kept under control. It’s all helped by four-wheel drive that has a rear-wheel drive bias when it’s needed. The steering is a little light in the comfort setting, though, especially for track work, but flick it into sport and it’s far better.

Auto Express gave the big Beemer four stars, saying: ‘Its handling abilities will surprise you given the sheer weight of the package, although the V12 engine’s gentlemanly approach to performance is slightly at odds with the “fastest ever BMW” tag – it just doesn’t feel it.’ However, PistonHeads was quite happy with it, saying: ‘Engine response is mighty, the turbo V12 able to hold a high gear and use the torque but also happy to rev out more than you’d expect of such a sizeable lump.’

For petrolheads, the fact that BMW perseveres with a V12 is a revelation. In a world where downsizing is the buzzword, it seems hard to believe that a manufacturer would launch a 6.6-litre petrol-drinking lump. Although the market for it will be small, we’re still very glad that it’s done so. Okay, so this might not be the M7 that many performance BMW fans crave, but it’s as close to it as we’re going to get. It’s great fun to drive, sumptuously luxurious and wonderfully relaxing when you want it to be – and all in all, a very competent and            exciting 7 Series indeed.